Spice up your weekend with these upcoming events in Vizag

Spice up your weekend with these upcoming events in Vizag Vizag always becomes all the more alive during the weekend with entertaining events taking place in the city. Giving Vizagites many reasons to be excited about this weekend, the city will play host to a number of events. From live music performances by well-renowned artists to stand-up comedies, the list holds a ton of entertainment. Make sure to attend them if you are in pursuit of a wholesome weekend.

Here is a list of upcoming events in Vizag you could attend this weekend.

Sandeep Thakur is gearing up to perform in Vizag, to give us a gift of his outstanding violin performance. He will be taking his audience on a musical journey at Dr YVS Murthy Auditorium on 27 January 2023. Striking Chords for Harmony 2.0, which is being presented by  Eureka- Pearls of Inspiration (an initiative by Reshma Jain), aims at raising money for unprivileged girls and women in Visakhapatnam. For passes to Striking Chords for Harmony event in Vizag, contact +91 9440858893 or +91 7382765093.

The Kerala-based multi-genre music band, Thaikuddam Bridge, will be performing this weekend in Vizag! The reputed rock band is currently the most sought-after group, performing for national and international audiences as well. The band is set to rock the stage at Novotel Varun Beach on 28 January 2023. Tickets are available on BookMyShow.

Are you in the mood for some standup comedy this weekend? Manoj Prabhakar is here with his new English Stand-Up solo show, Thinking Out Loud. He’ll walk us through some of his hilarious thoughts, and opinions about life. Hosted by The Grin Club, Manoj Prabhakar is ready to knock you out with his humour at Vizag Public Library, on 29 January 2023.

What a Shitty Guy

Yet another stand-up comedy happening this weekend, What a Shitty Guy is a hilarious act by Comicstaan-3 fame Adesh Nichit. After four back-to-back YouTube specials, Adesh is on a spree with new content, sharing his raw stories in the most hilarious way. Make sure to grab the tickets before they are sold out. What a Shitty Guy is being presented by The Grin Club and will happen at the Vizag Public Library on 27 January 2023. 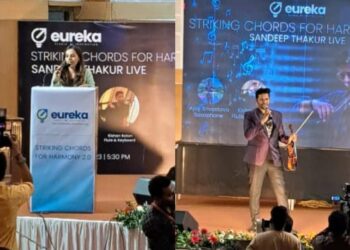