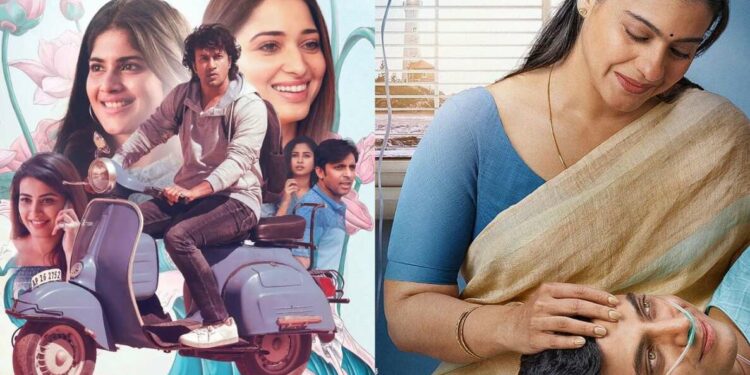 Already the second week of December, and the entertainment game at the box office seems to be getting interesting. With a number of movies lined up for release this week, make sure to plan your weekend ahead. The box office is all geared to be bombarded with movies releasing in Hindi, Telugu, Tamil, English and Malayalam this week. From Kajol to Satya Dev, look at the actors and movies releasing this week at the theatres.

Here is the list of movies releasing in Hindi, Telugu, Tamil, English and Malayalam this week at the theatres.

Among several small-budget movies releasing in Hindi this week, one movie that piques our interest is Salaam Venky. Directed by famous South Indian actress Revathy, the cast of the movie includes Kajol and Sunny Singh in lead roles. The movie is based on a true story of how a mother and son face their biggest challenges in life with a smile and teach us the true meaning of living life big.

Panchathantram, directed by Harsha Pulipaka, is a mix of five unique stories, each dealing with a life event tied around one sense organ. The cast of the movie brings Swathi Reddy back to the screens. Brahmanandam, Samuthirakan, Rahul Vijay, Divya Sripada and others play prominent roles. Another interesting movie releasing this week at the theatres is Gurtundha Seetakalam, directed by Nagashekhar. The cast of the movie includes Satyadev, Tamannah, Megha Akash, Kavya Shetty and others in lead roles. The story follows a software engineer and his love interests throughout his life.

Mukhachitram, directed by Gangadhar, stars Vishwak Sen, Vikas Vasishta and Priya Vadlamani in lead roles. The movie showcases Sen in the role of an advocate fighting for a cause. Head to the theatres to watch how he saves the needy.

Fall, directed by Scott Mann, stars Grace Caroline, Virginia Gardner, Mason Gooding and others in lead roles. The movie follows best friends whose life is all about conquering fears and pushing limits. Life takes a turn when they climb a 2,000 feet radio tower with no way down. Watch how their survival skills are put to the ultimate test.