On 31 January, 2022, the release dates of a number of most awaited Telugu movies have been announced by the movie makers. These movies include the magnum opus of the ace director S.S. Rajamouli, Ranam Roudram Rudhiram aka RRR, Acharya, Sarkaru Vaari Paata, and other movies. Most of these movies, which were scheduled to be the Sankranthi releases 2022, had to be postponed due to the alarming upsurge in the number of COVID-19 cases across the country. Since the majority of these movies are multi lingual releases, the makers decided not to release them during January, 2022, due to many states imposing COVID-19 restrictions.

DVV Movies, the production house of the pan Indian movie, RRR, has finalized that the movie will be releasing on 25 March, 2022. This movie stars the top Tollywood stars Ram Charan and Jr. NTR, alongside the Bollywood actress Alai Bhatt and Olivia Morris, as female leads. The film is also starring actors across the country such as Ajay Devgn, Samuthirakani, Shriya Saran, and others. The initial release date of this movie was scheduled on 30 July, 2020. However, the making of the movie had to be halted, due to the first and second waves of COVID-19. After being postponed multiple times, the movie was set to hit the silver screens on 7 January, 2022. With the third wave hitting the country, the makers decided not to release it for the Sankranthi season. 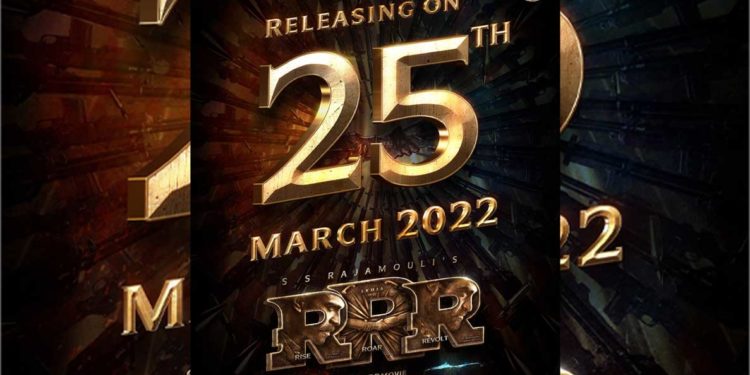 Megastar Chiranjeevi starrer Acharya, is set to release on 29 April, 2022, after a mutual agreement with the makers of RRR. The movie was recently scheduled to release on 1 April, 2022, after being postponed from 4 February, 2022. With RRR releasing on 25 March, the makers of Acharya have agreed to release their movie on 29 April. The movie stars the mega father-son duo Chiranjeevi and Ram Charan, directed by Koratala Siva. The female leads are being played by Kajal Agarwal and Pooja Hegde. Sarkaru Vaari Paata, starring Superstar Mahesh Babu, is set for a theatrical release on 12 May, 2022. The movie, which was supposed to release on 13 January, 2022, was postponed by the makers upon an agreement with the makers of RRR. After recently announcing that the movie will release on 1 April, 2022, it has been postponed to a later date in May, making way for the other movie releases. The movie stars Keerthy Suresh as the female lead, and is directed by Parasuram, under the Mythri Movie Makers and 14 Reels production houses. The multi-starrer Bheemla Nayak, starring Pawan Kalyan, and Rana Daggubati, has locked 1 April, 2022, as an alternative release date. As of now, the makers are planning to release it on 25 February, 2022. The movie will release on wither of these dates, depending upon the COVID-19 situation. This movie is a remake of the Malayalam movie, Ayyapanum Koshiyum (AK), and it is being directed by Sagar. K. Chandra. Apart from these movies, Venkatesh Daggubati, and Varun Tej starrer, F3, the sequel of the 2020 movie, F2, is set to release on 28 April, 2022. The makers of Radhe Shyam were expected to announce the release, along with the other Telugu movie release dates. The movie starring Prabhas, and Pooja Hegde, in the lead roles, was supposed to release on 14 January, 2022.