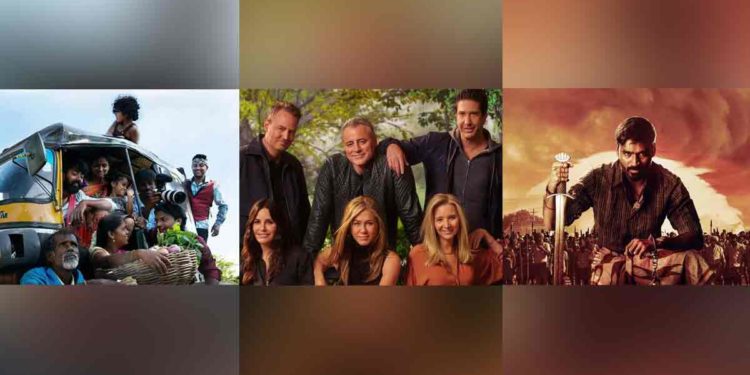 The beginning of Summer 2021 had some great releases in its bag. It’s undeniable that OTT platforms have revolutionized the perception of quality entertainment. While the country was still fighting with the Covid-19 pandemic, OTT entertainment was a source of relief. With the available time, internet resources, and of course digital phones, enjoying good projects is the new cool. May 2021 brought with it substantial releases of movies/web series on OTT platforms. Consisting of various genres and languages, in this article, Yo! Vizag mentions some of the impactful releases on OTT during May 2021.

A big present from the OTT platforms was the amount of recognition regional movies are getting. Milestone or Meel Patthar is one of those movies. Taking us on a journey of a man who is tired of his life. Driving the truck, a means of earning his daily bread is the only spark that keeps his fire of life alive. The movie is a metaphor for how we in our daily lives, forget the sole meaning of life

The ongoing Covid-19 pandemic might have led to most of the fans missing this ambitious project. Godzilla Vs Kong was one of the most anticipated releases. The movie performed pretty well at the box office, given the circumstances. Most Indian fans are yet to watch this movie, which is being touted as the best of the franchise.

Where to watch – Book My Show Stream

Lately, the Telugu movie industry had been on a spree with independent projects. These wholesome movies present a rollercoaster of emotions. Colour Photo, Ee Nagaraniki Emaindi, Agent Sai Srinivasa Athreya, and the most recent, Jathi Ratnalu. All these movies created magic on screen. Cinema Badi, directed by Praveen Kandregula, and produced by Raj and DK(The Family Man) was an addition to the list. The movie created a buzz everywhere for itself for the humble premise it had.

One of the most sought reunions for a sitcom after 15 years, people all around the world were eagerly waiting for the Friends Reunion special. Especially in India where the show enjoys a huge following, there was a lot of hype due to the announcement of Friends Reunion premiering on Zee5. The sitcom, over the years, has created a generous fanbase. The reaction of the audience was immensely emotional, as the iconic group returned on screen after a long time.

Mari Selvaraj’s ambitious venture, Karnan, took the audience by surprise. Again the pandemic and the regulation led to the movie performing average at the box office. The Dhanush starrer movie took on the caste prejudices and the obnoxious social idealism, faced by the poor sections of the Indian society. The movie captures a never seen before, cinematic cinematography. Theni Eashwer used high contrast colours, animals to provide the detailing this enthralling movie needed

Superhero movie enthusiasts highly awaited the sequel of Gal Gadot’s Wonder Woman. One of the most anticipated and possibly the best releases on OTT of May 2021, this DC Extended Universe movie focusses on Diana as she tries to fit into a new world while coping with the loss of Steve.

Tamannaah starrer November story is a thriller web series. The Indhra Subramanian directed series is a classic tale of a murder mystery. A daughter sets out to investigate a murder in which her father was found. However, what makes for an interesting premise is that her dad has no recollection of the events that occurred. His ailment made him forget so. This delightful and power-packed performance makes for a perfect crime thriller.

In the ongoing Covid-19 pandemic, a fresh action-packed movie is just what we need. Zack Snyder’s Army Of The Dead, starring Dave Bautista, is one such guilty pleasure relief in May. The movie presented a fresh outlook in the genre of ‘Zombie Apocalypse World’. Spoiler Alert, the zombies of this movie have evolved. They have intelligence. Zack Snyder’s amazing action sequences are here to save the day.

The limited series is based on a book by Colson Whitehead. The series is set in a utopian historical world. The period drama showcases the story of people as they unite against the slavery imposed by their British masters.

The spin-off animated series for Star Wars: The Clone Wars since its release in May 2021, has been the most successful franchise. The pilot for the five-episode long series was released on 4 May 2021. A new phase for the cult classic series Star Wars, The Bad Batch has been highly praised by the audience so far.

The 2021 Academy Award-winning K-Movie, Minari. A real-life depiction of a nuclear family; a family that dreams big. The movie narrates the story of a Korean-American family. The family shifts from their usual comfort zone, to get a share in the ‘Great American Dream’. Minari is a must-watch from May 2021 release on OTT. The subtle tale rings a bell on what makes the family complete.

Another Round, an Oscar-winning film for Best International Feature Film is a 2020 English comedy-drama. The hilarious movie brings in itself a sense of comic relief during the pandemic. In this movie, a group of teachers makes a deranged agreement. They decide to drink alcohol, daily, as a social experiment.

Already signed off for a third volume, Love Death + Robots is a sci-fi anthology. Taking to the screen one of its kind, an animated anthology series. It features some mind-bending fantasy stories. Volume 2 of the Emmy Winning series was highly anticipated. The 14 May 2021 release brought in some fresh stories with it.

Last but not least, Kala, yet another gem from the Malayalam Industry. Kala is an action-packed thriller movie. Not made for the fainted heart. Kala seeps into darker realms of human emotions. Akhil George’s cinematography attracts the eye to the very end. The Telugu dub of the moon is soon to be released in the first week of June. The Telugu version will stream on Aha.