After a long wait, the teaser of Prabhas’s upcoming movie Adipurush was launched yesterday. The event took place in all grandeur in Ayodhya, on the banks of River Sarayu. Director Om Raut and actress Kriti Sanon were also in attendance at what was called a mega event.

The movie’s first look showcased Prabhas donning the look of Ram, while speculations were that Saif Ali Khan would be playing the role of Raavan and Kriti will be seen in the role of Sita. The teaser of the movie showcases Adipurush to be more than a regular feature movie. It has various elements of animation and motion-picture technology, which is why fans have been divided on their opinion. Many of them took to Twitter to express their reviews, and yet again, hashtags against a movie have started trending. One among them is the #DissapointingAdipurush.

No one expected the movie to be an animated one. As no such hints were indicated through the first look, the tease came as a shocker. Most of the fans who have been disappointed have been wondering why 500 crores have been spent on an animation movie. Some of them even questioned if this was a new PS5 game. While the others have been defending the movie and that the new generation of animation lovers are going to love the movie. 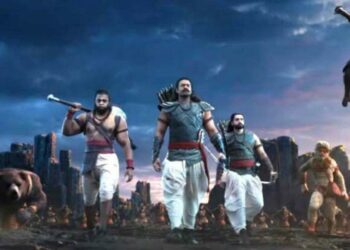