14 tourist places in Vizag that no one should miss visiting Nestled amid the scenic Eastern ghats, Vizag is undoubtedly one among the captivating cities in India. With picturesque landscapes and centuries of colonial history, the port city has been attracting travel enthusiasts since times immemorial. Here are our 14 picks for tourist places in Vizag that you can’t afford to miss. A popular name on any list of the must-visit tourist places in Vizag, the Ramakrishna Mission beach truly encapsulates the quintessential bustling city and the serenity of the bay. This iconic beach is a long lovely stretch of sea and sands with the Kali Temple, the Ramakrishna Ashram, the Submarine Museum, The Aircraft Museum Visakha Museum, War Memorial to soldiers of the 1971 war–‘Victory at Sea’ and other attractions stationed along the beach road. A hilltop park covered in lush green, the Kailasagiri adorns a 40-foot tall Shiva-Parvathi idol overlooking the city. The ropeway, a toy train, and the panoramic view make up for one of the spectacular tourist attractions in Vizag. It is also home to the Telugu Heritage Museum. 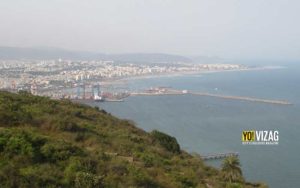 Situated in the southern part of the city, the mammoth rocky headland of Dolphin’s nose is nicely placed at an altitude of 358 meter with its projection to the Bay of Bengal in Visakhapatnam. Resembling Dolphin’s nose, this elevated rock also holds a lighthouse highly useful for the shippers with a light beam that can be seen as far as 64 km out at sea. Located at the foothills of Kailasagiri, the Tenneti park offers some breathtaking views of the coastline. This park has a unique charm about it and can woo the tourists instantly. Rushikonda beach is another popular destination for those who love thrilling water sport activities. From jet skiing to speedboat rides, this beach has become a go-to place on Vizag tour for all the adventure junkies. 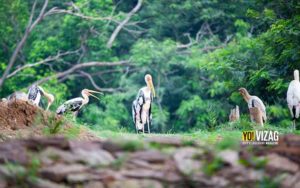 Sprawling over 625 acres, Indira Gandhi Zoological Park houses 97 species of animals, an aquarium with a wide range of freshwater fishes and a beautiful butterfly park making it an ideal destination for a day-long picnic with your family and friends. Perched on an imposing hill, the Ramanaidu Studios offer a breathtaking view of the shimmering city, and the waters beyond. The studio is spread out on 9 acres of land and with the scope of further expansion to 35 acres. The Simhachalam Temple with Lord Varaha Lakshmi Narasimha as its deity is the most prominent shrine in Vizag. The significance here is that the idol represents both the Varaha and Narsimha incarnations of Lord Vishnu. With over 525 inscriptions on the temple walls, the oldest dates back to the Chola King Kulothunga, 1098 AD. There are also references to Sri Krishna Devaraya who donated ornaments and land to the Lord. The idol is perpetually covered with Sandalwood paste which is replaced every year on Akshaya Tritiya. Sri Kanaka Mahalakshmi Temple and Sri Sampath Vinayar temple are other noteworthy shrines in the city. This ancient Buddhist Heritage site from 3rd Century BC to 3rd Century AD gives a glimpse of Vizag’s ancient links to Buddhism. The other heritage sites include Bavikonda and Bojjannakonda. 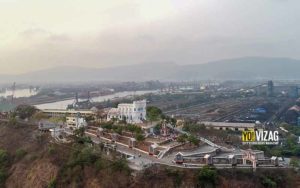 As a unique testament to communal harmony of the Vizagites, each of the three picturesque hillocks has its own distinctive religious significance. There is The Venkateswara Temple on the ‘Sringamani Hillock’, The Ross Hill Church on the ‘Ross Hill’, and The Baba Ishq Madina Dargah on the ‘Dargah Konda’. Each of these shrines has added to the glory and history of Vizag. The port-channel, the entrance of the inner harbor for ships and liners can be seen from these hilltops. Translated as Red Sand Dunes, the Erramatti Dibbalu near Bhimli is a rare natural formation found only at three places around the world namely Sri Lanka, Rameswaram and here. Located around 111 km from Vizag, Araku will woo you over with its enchanting coffee plantations and the serpentine Ghat roads. Monsoons make for the best time to visit this hill station as the Katiki waterfalls nearby will be meandering through the rocks.

The list of tourist places in Vizag is incomplete without Lambasingi. A hamlet sandwiched between the Eastern ghats in Chintapalli Mandal of Visakhapatnam. Lambasingi is situated at an altitude of 1000 meters above sea level. Popularly known as Andhra Ooty, it has recorded the lowest temperature during winter with thick fog hovering until 10 AM. With camping spots available, pick your favourite spot and set up a camp with your friends and family. The best time to visit Lambasingi is during the winter months December to March when one can even partake in strawberry picking at the farm.