The Andhra Pradesh State Road Transport Corporation (APSRTC) bus robbery that was reported yesterday, has been found in Vizianagaram District on Tuesday. According to the police, the bus was stolen by a man to reach home after failing to find any public transport during the late hours of Monday.

The stolen bus belonging to the Palakonda Bus Depot was stolen from the Vangara Mandal headquarters where the driver had parked it on Monday night. It was found in Kandisa village, after several hours of search by the police and APSRTC officials.

The APSRTC bus driver who was shocked to see the bus missing from where he last saw it, reported the suspected robbery to his higher officials of Vizianagaram District. The APSRTC officials then complained to the Vangara Police Station. Acting on the complaint, the police along with the officials set out a search operation.

The police reported that the accused who was under the influence of alcohol stole the student’s special bus at Vangara and drove it towards his village as he did not find any other means of transport. The police caught several suspects, out of which the accused confessed to his crime. The accused has been booked for theft. 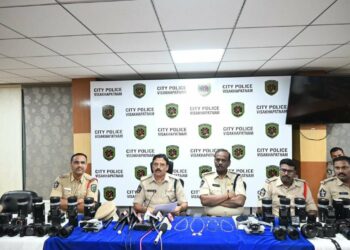