If you are searching for a perfect web series for an entertaining and gripping binge, you are at the right place. Known for giving the world some of the best movies and web series, the makers from South Korea have never failed to attract the audience with their work. From rom-coms to suspense thrillers and fantasy dramas, K dramas boast the best of all. Giving us more reasons to be entertained, the Korean makers have also made a bunch of gripping horror web series that are must-watch if you are a fan of the genre.

Here is the list of must-watch Korean horror web series available on Netflix.

Also read: Weekend in style with these 2022-released Korean dramas on Netflix

Kingdom is a 2019 South Korean period horror web series created and written by Kim Eun-hee and is based on a webtoon series named The Kingdom of the Gods. It was the first ever Netflix first original Korean series. Set in the 16th century, three years after the events of the Imjin War, the plot follows Lee Chang, the crown prince of Joseon, now Korea. In an attempt to unravel the mystery behind a supernatural plague that resurrects the dead, he has to fight a deadly epidemic while silencing his political rivals. The series stars Ju Ji-hoon, Seo-bi, Yeong-shin, Kin Hye-jun, and others in the main roles. Later, a spinoff movie named Ashin of the North, which is set before the events of Kingdom was also released on Netflix.

Number of episodes: 6 (each season)

The Guest is a 2018 Korean supernatural horror series based on the concepts of exorcism and shamanism and stars Kim Dong-wook, Kim Jae-wook, and Jun Eun-chae in the lead roles. The plot follows the life of Yoon Hwa-Pyung, the son of a shaman father, who grows up to be a psychic. As a child, he encounters horrific experiences in which he gets possessed by an anonymous spirit. When his mother and grandmother are killed, his father throws the blame onto the young Hwa-Pyung. The series was created by Jinnie Choi and was directed by Kim Hong-seon.

Starring So Ji-sub and Gong Hyo-jin in the lead roles, Master’s Sun is a Korean romantic horror series created by the Hong sisters. The CEO of a conglomerate, Joo Joong-won, meets a gloomy girl who has a newfound ability to see ghosts. She realises that whenever she touches Joong-won, the ghosts disappear. As she requests to let her stay with him, Joong-won asks for her help to find a lost fortune. The show was directed by Jin Hyuk.

Directed by Park Jin-seok this Korean horror drama stars Jang Na-ra, Jung Yong-hwa, Kang Mai-geum, and others in crucial roles. The show is about a real estate broker who is also an exorcist who deals with a haunted real estate where powerful spirits linger. He joins hands with a con artist to find out the truth behind her mother’s death that happens 20 years ago.

Starring Uhm Ji-won, Jung Ji-so, Sung Dong-il, and Jo Min-su in the lead roles, The Cursed is a Korean horror series directed by Kim Yong-wan. The plot revolves around a girl with special powers that can bring death by just using names, photographs or even belongings. Her life entangles with a social issues reporter fighting against a massive evil IT conglomerate.

Let us know which one of these must-watch Korean horror web series you are binging on Netflix first. Stay tuned to Yo! Vizag website and Instagram for more entertainment. Weekend in style with these 2022-released Korean dramas on Netflix 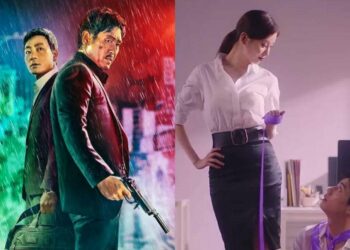