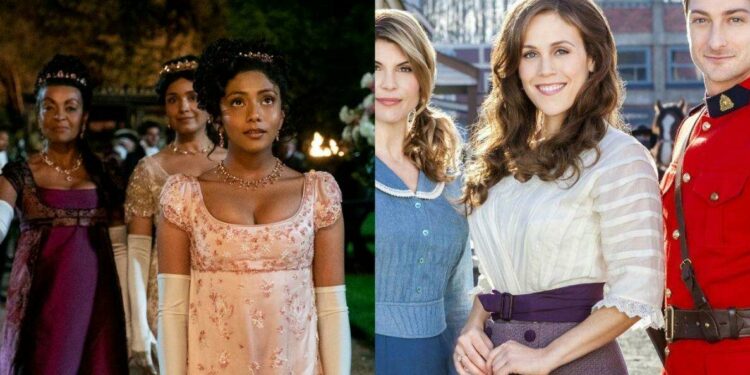 Winning the hearts of the viewers with its very feminist take on the social norms of the 19 century, London, the Netflix period piece Bridgerton became one of the most-watched on the OTT platform. The streak of period pieces took on the platform with its success and if you are looking for your next OTT binge, here are 5 other period pieces on Netflix you must watch.

The 2010 British drama series tells the story of Robert Crawley who risks losing the family estate after his heirs die on Titanic. A new heir who comes to take over resists the aristocratic way of life. This 6 season’s show has 52 episodes to binge on. The cats of the show include Michelle Dockery, Hugh Bonneville, Laura Carmichael and others in prominent roles.

#2 When Calls the Heart

Based on a book of the same name, this period drama is a 2014 series which is a must-watch on Netflix. A young teacher who lives a wealthy life finds her life changed when she is assigned her first classroom assignment in a small coal-mining town. The cast of the series includes Erin Krakow, Chris McNally, Kevin McGarry, Pascale Hutton and others in prominent roles.

This 2017 period piece on Netflix is a story of an Irish immigrant who is convicted of the murder of her employer. A psychiatrist analyses her mental state when things take a turn in her life. Directed by Mary Harron, the cast of this adapted series includes Sarah Gardon, Edward Holcroft, Anna Paquin and others in prominent roles.

True to its title this 2017 series on Netflix explores the story of four young women who get jobs in the first national telephone company in Spain in the 1920s. The series shows how they represent progress that is being made at a time when women were gaining equality. With 5 seasons to binge-watch, the cast of the series includes Ana Fernandez, Blanca Suarez, and Nadia Santiago in prominent roles.

Latest on Netflix, this 2021 historical drama has just one season to watch. Telling the story of 1720 Madrid, a talented cook catches the eye of a widowed duke just as he returns to aristocratic society. The cast of the show includes Michelle Jenner, Roberto Enrique, Maxi Iglesias, and others in prominent roles.

Let us know in the comments below which of these 5-period pieces on Netflix other than Bridgerton you have already watched.