After movies such as Ramarao on Duty, Pakka Commercial, and Thank You disappointed the Telugu audience, Sita Ramam gave us all a sigh of relief, thanks to Hanu Raghavapuudi. The stunning performances, eye-catchy visuals, and soulful music drew our attention like no other movie in the recent past, with KGF and RRR being the exceptions. Like Sita Ramam, the Telugu Film Industry has produced some exceptional love stories in the past which were showered with praises and admiration from the audience. If you are still in the trance Dulquer Salman and Mrunal Thakur put us in, here are some feel-good Telugu love stories you must watch right away.

Read on for the list of must-watch feel-good Telugu love stories you can watch if you are still not over Sita Ramam.

Set in pre-independent India, Kanche is a periodic love drama directed by Radha Krishna Jagarlamudi aka Krish. Serving the British-Indian army in World War II, Hari Babu hails from a village prevailing with casteism. Back home, he falls in love with a girl from a higher caste whose family is strictly against their relationship. The screenplay switches between two different timelines which show the protagonist’s war-torn life in the present and his love story in the past. Director Krish was lauded for hooking the audience to the screens with the engaging storyline, eye-catchy visuals, hard-hitting dialogues, and the great chemistry between the lead pair. To date, Kanche is regarded as one of the best love stories to be made in Telugu and was a path-breaking film for Varun Tej.

Shekar Kammula is regarded as one of the very few Telugu directors to make close-to-reality movies and has time and again proved his mettle with movies such as Godavari. Starring Sumanth and Kamalini Mukherjee, the plot revolves around how destiny brings Ram and Sita together on a boat journey to Bhadrachalam. Set among the picturesque Papikondalu, the journey on the Godavari river is beautifully captured and the music by KM Radha Krishna adds immense value to the director’s vision. The movie remains to be a classic and has created a special place for itself in the hearts of the Telugu audience.

Yet another timeless love story by Sekhar Kammula, Anand stars Raja Abel and Kamalini Mukherjee in the lead roles. The movie captures how a heartbroken woman finds comfort in the company of a stranger and, in the process, falls in love with him. Anand is a movie full of fresh faces to the film industry and is a must-watch if you looking for a break from the routine commercial flicks. The music composed by KM Radha Krishna hits many with nostalgia and instantly teleports us to the love-filled world of Anand and Rupa.

Malli Raava is a 2017 feel-good rom-com directed by the Jersey-fame Gowtham Tinnanauri in his directorial debut. Starring Sumanth and Aakanksha Singh in the lead roles, the plot revolves around two childhood friends who are brought together by love at different stages of their lives. Apart from the beautiful love track, the success of the movie is also attributed to some light-hearted comedy and melodious tunes. The actors who played the younger versions of the lead pair, Sathwik Varma and Preethi Asrani, also received praise for their performances.

Oohalu Gusagusalade is one of the most loved Telugu rom-coms of all time. Directed by Srinivas Avasarala, this hilarious flick was released in 2014 and stars Naga Shaurya and Raashi Khanna in the lead roles. The plot revolves around a TV show presenter who aspires to be a news reader one day. The soulful tunes composed by Kalyani Malik are still listened to on a loop by many. Director Srinivas Avasarala, who also played a crucial role in the movie, was well-appreciated for his quirky one-liners and comedy tracks.

Directed by Mohan Krishna Indraganti, Sammohanam is a 2018 romantic love story starring Sudheer Babu and Aditi Rao Hydari in the lead roles. An introverted film actress falls in love with a cartoonist during a film shoot at his residence. How they end up together despite some misunderstandings and differences forms the plot. If the love track is the heart of the film, the stunning visuals and picturization are the soul. Sammohanam put Sudheer Babu’s career back on track after a series of disappointments and also brought Aditi Rao closer to the hearts of the Telugu audiences.

Let us know if there are any other Telugu love stories you feel are a must-watch. Stay tuned to Yo! Vizag Instagram and website for more. 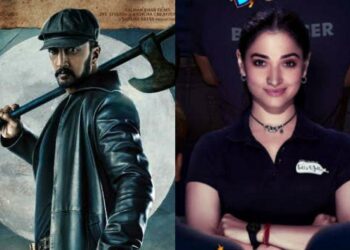