5 upcoming biopics in Bollywood that are eagerly awaited

5 upcoming biopics in Bollywood that are eagerly awaited Bollywood has brought to light some of the most amazing biopics of all time. Thanks to such films, we get to watch and experience the life of some absolute legends. This year too, Bollywood has many such movies based on the real-life events of several people. Here are 5 such flicks releasing this year that have kept the film lovers intrigued. Akshay Kumar will be seen starring in a biopic on the legendary hockey player – Balbir Singh. The movie will showcase Indian hockey team’s amazing journey at the Summer Olympics 1948. The film’s cast includes Mouni Roy and Kunal Kapoor among others. Directed by Reema Kagti, this film will be releasing on Independence Day 2018. 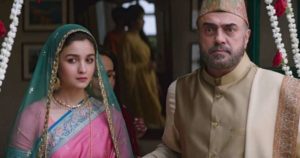 The film Raazi, a periodical thriller, would portray the story of Sehmat, a patriot who vows to protect her country in the times of war. Alia Bhatt, who is known for her versatility, would be seen playing the role of an innocent Indian girl who turns herself into a spy, placing everything at stake to save her country. The film is based on Harinder Sikka’s – ‘Calling Sehmat’. The film would release on 11th May, under the direction of Meghna Gulzar.

Sanju is based on Sanjay Dutt’s controversial life events. The film would uncover the various facets of his life. It stars Ranbir Kapoor playing the character of Sanjay Dutt. Sanju is directed by Rajkumar Hirani and it will hit the screens on June 29th this year. This historical biopic would date back to the time of Jhansi Ki Rani – Rani Lakshmibai. Kangana Ranaut will be seen enacting the role of the first Indian woman leader, who fought fearlessly, breaking all the stereotypes to safeguard her kingdom. The film is directed by Krish Jagarlamundi. One should watch this movie to know about the honour and valour of Rani Lakshmibai. It comes out on the 3rd of August. Diljit Dosanjh and Tapsee Pannu will be sharing the screen together for the first time for the biopic on yet another hockey player, Sandeep Singh. The picture is expected to hit the screens on June 29 and is one among the most eagerly awaited biopics.