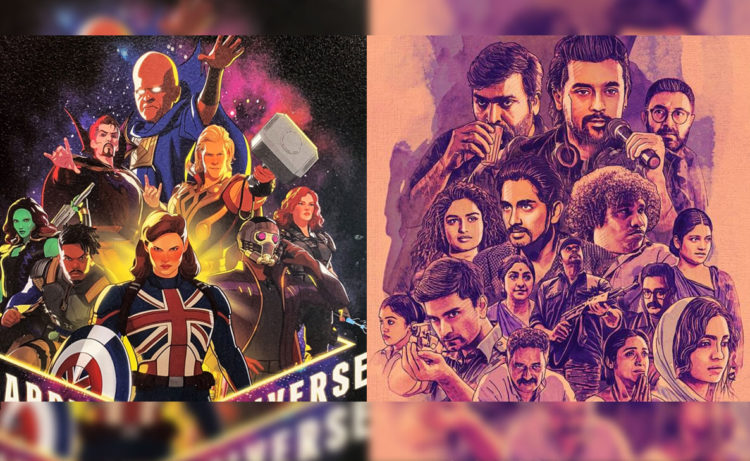 As we enter the eighth month of the year, the OTT platforms are all set to launch new releases for the month. With the theatres functioning with half capacity, OTT platforms are the only saving grace during the ongoing pandemic. The month of July saw blockbuster hits like Malik, Sarpatta Parambarai and the likes, August 2021 is all set to be jam packed with more movies to watch, promising ultimate entertainment.

Here is the list of movies you should watch out for in the month of August 2021.

Navarasa is an upcoming Indian anthology web series in tamil. It is created by the famous director Mani Ratnam and features nine stand alone episodes inspired from the Indian concept of Navarasas (nine emotions). The series is directed by Priyadarshan, Karthik Subbaraj, Vasanth, Arvind Swami, Bejoy Nambiar, Karthick Naren, Gautham Vasudev Menon,Sarjun KM and debut director Rathindran R Prasad. All the nine episodes represent a different rasa or an emotion. The film was conceptualised with an aim to help the industry workers, whose lives took a toll due to the pandemic. Hence, none of the actors and directors have charged any remuneration for the work.

An upcoming American animated anthology series, What if…? is based on the Marvel Comic series of the same name. It is Marvel Studios first animated series and explores alternate timeline in the multiverse and ponders upon the possibility of major events happening differently. The series is directed by Bryan Andrews who is an American storyboard artist and writer. He previously contributed to Star Wars:Clone Wars, Avengers: Endgame and the like.

After the release of the first and the second parts on OTT screens, Kissing Booth 3 is all set to release in August.It had been nearly a year since Netflix announced there would be a Kissing Booth 3 and fans couldn’t contain the excitement. The Kissing Booth has garnered massive popularity over the years. The teen rom-com film is penned by Marcello and Jay Arnold and is based on the final book in the trilogy of Beth Reekles.

Shershaah is a Hindi-language biographical war film, tracing the life journey of army captain Vikram Batra. Shershaah is a true story of a PVC awardee Indian soldier whose contributions helped win the Kargil War of 1999. The film is directed by Vishnuvardhan and is co-produced by Karan Johar. It stars Siddharth Malhotra in a double role.

Riding high on the success of Tenet, John David Washington is doing another action-thriller. Beckett is an American tourist in Greece who becomes the target of a manhunt after an accident. The movie also stars Alicia Vikander and Boyd Holbrook in pivotal roles.

#6 Bhuj: The Pride of India

One of the two patriotic Hindi movies releasing this month, Bhuj: The Pride of India tells the story of the 1971 India-Pakistan war when the IAF airfield at Bhuj was bombed by the Pakistanis. The movie has an ensemble cast of Ajay Devgn, Sanjay Dutt, Sonakshi Sinha, Pranitha Subhash, Sharad Kelkar and Nora Fatehi.

One of the exciting OTT releases in August, Netrikann is the next psychological thriller from Nayanthara. Starring her as a blind woman, it is the remake of the 2011 Korean film Blind. Ajmal Ameer plays a serial killer in the film, who is on a bit of a streak till his paths collide with Nayanthara’s character. Nayanthara is an expert in female-centric Tamil thrillers and you can simply add this one to the list when it releases.

The 2018 Hindi dark-comedy Andhadhun was a major hit, offering something fresh to the viewers. One can expect that the Telugu remake will live up to the original. Starring Nithiin in the lead, it tells the story of a blind man who is caught between a murder investigation and has to make his way out of it. While Ayushmann Khurrana excelled in the original, one can expect that Nithiin will also do justice to this amazing story.