One of the criminally underrated Telugu actors, Sree Vishnu has finally got his due stardom from his latest, Raja Raja Chora. This crime-comedy has been a major box office success during pandemic times while drawing praise from all corners. The movie recently began streaming on the OTT platform Zee5.

But what this success doesn’t show you are the many years Sree Vishnu had slipped under the radar. After doing his graduation in Vizag, he worked for a while in Hyderabad before realising his dream of becoming an actor. His entry into Tollywood hadn’t been easy. He had done supporting roles in big-budget movies (mostly playing the protagonist’s best friend) and cameos in some other movies, along with lead roles in Telugu indie movies.

The success of Raja Raja Chora might pave the way for him to star in more mainstream movies. But for now, let us look at some of his most memorable performances over the years:

Going in chronological order, we start with Prema Ishq Kaadhal, an anthological Telugu movie. One of the three segments in the movie focuses on Royal Raju, a character played by Sree Vishnu and his quest for love. The segment beautifully covers the ups and downs in a man’s love life, spearheaded by Sree Vishnu’s performance.

Sree Vishnu, who was a state-level cricketer in his teenage years, plays an aspiring cricketer in this action movie. A story told from multiple perspectives, it covers the character’s promising talent and then his downfall to a life of crime. The movie received great reviews on its release, with the story, in particular, drawing praise. For all Sree Vishnu fans, this is one of his best performances you should all watch.

One of the famous supporting performances of Sree Vishnu, this romantic comedy has him portraying Ram Pothineni’s character’s best friend. The story, in truth, focuses on both the characters and their strong friendship and how a girl comes between them. Some scenes of this movie were shot in Visakhapatnam as well.

Inspired from the Telugu version of the title song of OK Kanmani, this romantic-comedy marks the Telugu debut of Nivetha Pethuraj. It tells the story of a man named Aravind, played by Sree Vishnu, who is always confused and finds it difficult to make decisions. Then, he meets a woman who brings a positive change in his personality. The movie was highly successful on its release and Sree Vishnu received a lot of accolades for his acting in this movie.

Where to watch – Aha

This movie connects hard with the Telugu youth, talking about gaps in the education system which prevent us from realising our dreams. Sree Vishnu delivers a career-defining performance as the protagonist who is seen as a failure in life by everyone, including his father. Later, he finds his own path and forgoes the popular conception of needing to be a topper in order to be successful.

Where to watch – MXPlayer

In one of the surprise hits of that year, Sree Vishnu portrayed one of the three protagonists, who are failing at school. The story follows their lives and how certain events lead to the trio creating a fake crime in order to earn fast money. With an interesting premise and wonderful narration, this comedy was really entertaining to the audiences while the movie was also appreciated for the performances of the trio – Sree Vishnu, Rahul Ramakrishna and Priyadarshi.

And in the end, we come to what can be considered as the best performance by Sree Vishnu in his Tollywood career. Another crime comedy, it explores the many lives a middle-class person lives. Released during the Covid-19 pandemic, the movie was one of the few successes at the box office, with the critics giving it the thumbs up in every aspect. It is now available to watch on Zee5. 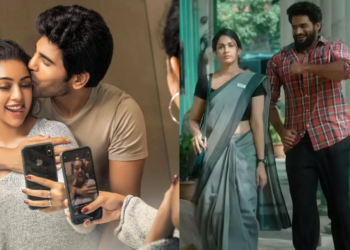