The ongoing pandemic has cut off our chances of going to the theatres and watching movies of our favourite stars, OTT platforms, in India, have attempted to compensate for that. Recently, quite a few Telugu movies have been released on various OTT platforms for viewers to watch sitting at home. Here are the ones you should watch: This romantic-comedy covers that awkward situation where you are looking for a bride and you end up falling in love with the very person who is setting up those alliances for him. Starring Sagar, aka RK Naidu, and Drishya Raghunath in the lead roles, Shaadi Mubarak is a light-hearted, yet, a realistic take on the arranged marriage custom in India. Watch it for the electric chemistry between Sagar and Drishya Raghunath.

Shaadi Mubarak was made available on Amazon Prime Video on 24 March 2021. Not many Telugu films have released in 2021 but Jathi Ratnalu has been widely considered as a fair compensation for that. This hilarious 2 hours 28 minutes masterpiece is so layered that the brilliantly written story eclipses the outstanding acting of Naveen Polishetty, Priyadarshi and Rahul Ramakrishna. It might seem like a simple popcorn entertainer but it’s much more than that. One of the best romantic dramas to have come out of the Telugu film industry in the last month or so, Uppena is a film that explores a lot of themes, like casteism and patriarchy, along the lines of a youthful romance.

Vaishnav Tej and Krithi Shetty shine in their debut Telugu performances as a young couple who have to fight through the societal norms of casteism. Vijay Sethupathi, in the meanwhile, is his usual fierce self and thrives in his role as the female lead’s father. All this makes Uppena a must-watch among the Telugu movies OTT released recently.

Uppena released on the OTT platform Netflix on 14 April 2021. Promoted as a tribute to the educated farmers of India, Sreekaram focusses on the story of a software engineer who lets go of his job in Hyderabad to return to his village and take up farming. Sharwanand nails this role to perfection and Rao Ramesh provides able support as the protagonist’s father. This movie will put tears in the eyes of all those Indians who share a deep connection with their home soil.

Sreekaram, after a theatrical release, was put up on Sun NXT on 16 April 2021. 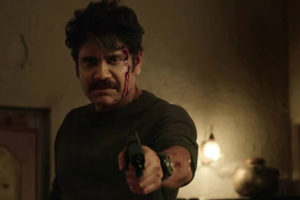 If you’re in need of some mid-week action, watch this fast-paced movie. Starring Akkineni Nagarjuna, Dia Mirza, Saiyami Kher and Atul Kulkarni, this movie is based on the Gokul Chaat bomb blast that took place in 2007. While the actors deliver strong performances, debutant director Ashishor Solomon keeps the story very thrill-a-minute and doesn’t leave much room for any dramatic emotions. Despite that, Wild Dog is worth watching once for all the patriotic movie-goers.

Wild Dog released on the OTT platform Netflix on 22 April 2021. This might not be the best movie to have released in 2021 but it’s a worthy one-time watch if you’re a Karthikeya fan. Also starring Lavanya Tripathi and Murali Sharma in key roles, it is the story of a funeral van driver in Vizag who falls in love with a grieving widow. While Karthikeya and Lavanya excel in their roles, the story falters as the movie goes on and becomes a tedious watch.