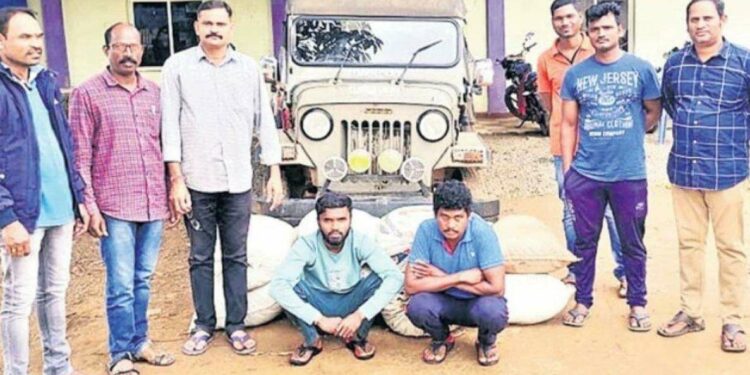 On Monday, 25 July 2022, two smugglers were held for attempting to smuggle ganja to Odisha from Munchangiputtu Mandal near Visakhapatnam District. As per police reports, a total of 178 kilos of ganja was seized near Labburu Village while being trafficked in a jeep.

Acting on a tip regarding ganja smuggling, the police conducted checks at the Labburu Village. During these checks, a jeep with two men approached the check post. Upon inspecting the vehicle, it was found out that the two men were in possession of 178 kilos of ganja. Later, it was learnt that they were trying to smuggle the ganja to Odisha from Visakhapatnam District.

The two smugglers were identified to be residents of Lakshmipuram in Munchagiputtu Mandal. Along with the ganja, the police seized the jeep used for smuggling and arrested the two men.

In a similar case, the Alluri Sitharama Raju District Police seized 1,500 kilos of ganja while being smuggled to Visakhapatnam from Araku. The three smugglers who were involved in the case fled the scene and the police initiated a manhunt.

Last week, the Special Enforcement Bureau (SEB) and Drug Disposal Committee decided to burn down 3,000 kilos of ganja stored at the Chintapalli Police Station. A letter seeking permission to burn the ganja down has been sent to the government.