Visakhapatnam, the City of Destiny, is loved, not only by its residents but also many people across Andhra Pradesh. The picturesque beaches, green hills, and many other tourist attractions are the major reasons for all the love. In order to increase the filmmaking opportunities, and generate a livelihood , noted film producer late Dr. D. Ramanaidu set up Ramanaidu Studios, Vizag, in August 2007. Since its inception, this film studio has been a one stop shop for the production of many films. Upon entering the studio, the visitors get the feeling of entering into a real city, with life size film sets of houses, hospitals, offices, police stations, and many other buildings. Surrounded by the blue ocean on one side and green hills on the other, this well planned studio stands atop a hill with a breathtaking view of Visakhapatnam.

Here are the top interesting factors about Ramanaidu Studios, Vizag: 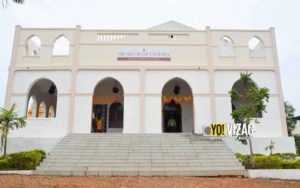 The first of its kind in Andhra Pradesh, the Museum of Cinema at Ramanaidu Studios, Vizag, was established on the 79th birth anniversary of Dr. D. Ramanaidu. Each section of the museum narrates a story of how films are made and showcases the evolution of film making in India. Thus, giving the visitors an opportunity to understand the art and craft of making a movie. The film making equipment ,showcased at the museum, dates back to 1960, the time when colour cinema had entered the market.

Ramanaidu Studios, Vizag, has a number of view points, around its perimeter, where the visitors can enjoy a daytime bird’s-eye view of the beach and the hills around the studio. During evenings, one can relish the bright lights view of Vizag. The cinematic view from these points brings out the photographer in you to capture the surreal sceneries. The pictures of the sceneries would be saved not only in the cameras, but also in the hearts of the visitors forever. If having a cup of coffee with a view of the beach is your idea of a perfect evening, then you must not miss visiting the Bean Board Coffee Shop located on the hill of Ramanaidu Studio, Vizag. The Caramel Macchiato, and  Cappuccino, are the most popular hot beverages here. Not to forget the Butter Pound Cake, Blueberry Cheesecake, and a variety of sandwiches one must try. Evenings are the best time to visit Bean Board in Ramanaidu Studios. The main purpose of visiting Ramanaidu Studios is to witness the sets erected for movie shootings. Upon entering the sets, you would get the feeling that you have been there before. The reason for this feeling of familiarity is because you must have watched some movie which was shot at the same spot. One would lose track of time looking at all the realistic hospitals, police stations, bungalows, and other well crafted buildings.