The team of LiveIn Adventures

A Vizag-based scuba diving school, LiveIn Adventures, recently had a brush with long-lost history when they discovered a 100-year-old ship at the Baruva coast in Srikakulam. The British-era shipwreck named ‘Chilka’ had reportedly sunk in 1917 and was lost at sea since. Chilka apparently belonged to the British India Navigation Company and was en route to, the then, Rangoon when it capsized in a fire accident.

The group of divers discovered the shipwreck covered in sand, dense fungus and other live corals. They are of the opinion that the wreck site, just 400 meters away from the shore, would be an excellent diving point for tourists to discover. “In our experience of hosting diving sessions, over eight years, tourists always get excited to visit shipwreck sites. Previously, we discovered two shipwrecks at Chintapalli and Mangamaripeta. When we heard of the British-era shipwreck at Baruva, we consulted the locals and researched about it,” says Balaram Naidu, founder of Livein Adventures in Vizag. 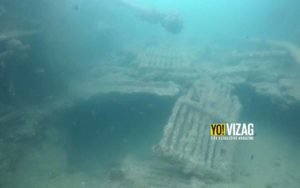 Speaking about how the ship was discovered, Mr. Naidu says, “We were told that a mast would be visible at half a kilometer away from the shore. We picked a day that was ideal for diving and set out to find the ship. When we found it, it was covered in dense sand, thick fungus and live corals. Various schools of fish had made it their home. It was a beautiful sight.” 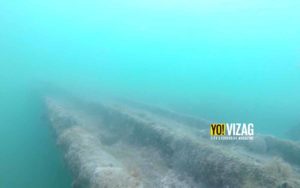 “The 150-meter longship is at a depth of just 6 meters from the surface, ideal for novice divers,” said the ex-Naval officer. On asked about when tourists could go visit the shipwreck, Balaram Naidu says, “We need to conduct more dives to the site, assess how safe it would be for tourists, and then submit a report to the Tourism Department about its novelty.”

Chilka was launched in 1910 and was in service for seven years, before capsizing in 1917. When the captain of the ship observed that the ship caught fire, he diverted it to Baruva – an important harbour during British rule. However, the ship carrying 1600 passengers on board sank, killing 81.