It just keeps getting better! The Telugu Indian Idol has been taking interesting turns every week. Hosted by Sree Ram Chandra, the new singing reality show in Telugu is judged by Nithya Menon, Thaman, and Karthik. With a new theme every week, the show has been tuning up the contestants with constant feedback and eliminations. Episodes 17 and 18 aired with the theme of retro last weekend and had some tense moments worth a mention. Thaman and other judges pre-planned to trick a few contestants in order to create some tension on the sets of Telugu Indian Idol. Episode 17 had a special guest, Vishwaksen who came to promote his upcoming movie, Ashoka Vanam lo Arjuna Kalyanam releasing next month. The famous Telugu cinema actor danced with the participants and spoke about his film and requested everyone to watch it in the theatres. Starting off with participant number 1, Vaishnavi sang the song Na Paruvam Nee Kosam and was highly appreciated by the judges for her performance. Termed the Shreya Ghoshal of the show, she received the ‘Bomma Blockbuster’ performance.

Participants Lalasa, Srinivas and Renu Kumar failed to impress the judges in the retro round and were asked to prepare better for their next performances. The last participant Jayanth on the other hand sang the song Oho Laila O Charu Seela and received the ‘Bomma Blockbuster’ performance. This concluded the episode on Friday, along with a few jokes cracked by the special guest and other housemates.

Episode 18 saw yet another interesting round of participants who added their own twists to the songs and performed for the retro theme. The first participant, Pranathi sang the song Jallantha Kavvintha and managed to gain the ‘Bomma Blockbuster performance’. Vagdevi and Aditi Bhavaraju who sang the songs Konchem Neeru Konchem Nippu and Rojala Letha were also appreciated for their performance and were given the ‘Bomma Blockbuster performance’. On the other hand, Manya and Maruthi failed to impress the judges with their performances on Janavule and Chukkalu Themmanna respectively. The episode had many interesting points when the judges tried to pull a few pranks on the contestants. Thaman and Karthik lashed out at the sound team of the Telugu Indian Idol and blamed them for the poor performance of Aditi, and called out the joke, just seconds before she broke down into tears. Karthik followed the same even with Pranathi. Another major highlight of the episode was Pranathi and Jayanth’s take on the famous train scene of Geethanjali. Towards the end of the show, Aditi Bhavaraju was named the Zepto performer of the week.

The voting lines are open and let us know who is your favourite Telugu Indian Idol contestant in the comments below. 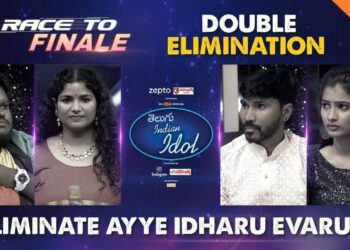