Ram Kovind to be Chief Guest at Mahashivaratri celebrations at Isha President Ram Nath Kovind will be the Chief Guest at the 25th year Mahashivaratri celebrations on 4 March at Isha Yoga Center in Coimbatore. The President will visit the Dhyanalinga yogic temple, the Linga Bhairavi Devi temple as well as the Suryakund before proceeding to Adiyogi where the Mahashivaratri event will unfold. The President will participate in the Pancha Bhuta Aradhana at the Dhyanalinga temple, a ritual to cleanse the five elements (earth, fire, water, wind and the limitless space).

Ram Nath Kovind will join Sadhguru, Founder, Isha Foundation in paying tributes to the martyrs of Pulwama by planting saplings at the Isha Yoga Center.

Isha is celebrating the 25th year of Mahashivaratri in the presence of Adiyogi, unveiled during the 2017 Mahashivaratri celebrations by Prime Minister Narendra Modi. The 25th year event is expected to be bigger and grander than ever before with several well-known artists performing through the night. Musical performances by Amit Trivedi, Hariharan, Karthik and other popular artists including drummers from Azerbaijan, classical dance performances, folk art and culture and meditation sessions are part of the night long festivities planned at Isha Yoga Center. Sounds of Isha, the in-house Isha music group will also perform at the event. The highlight of the event is the powerful midnight meditation session with Sadhguru. Annadanam or an offering of food to all those who participate at Isha is another major event of Mahashivaratri at the Yoga Center.

People from around the world are expected to participate in this year’s Mahashivaratri either in person or virtually through live streams. Over 100 television and web channels including English and regional language channels will relay the event live from 6 p.m. on 4th March to 6 a.m. on 5th March.

On the significance of Mahashivaratri, Sadhguru says “When we say Shivratri, which is the darkest night of the month, it is an opportunity for one to dissolve their limitedness, to experience the unboundedness of the source of creation which is the seed in every human being. Mahashivratri is an opportunity and a possibility to bring yourself to that experience of the boundlessness within every human being, which is the source of all creation.”

In the yogic culture, Shiva is not known as a God, but as the Adiyogi or the first yogi – the originator of yoga.  “Adiyogi brought this possibility that a human being need not be contained in the defined limitations of our species. He said, ‘You can evolve beyond your present limitations if you do the necessary work upon yourself.’ That is the significance of the Adiyogi,” says Sadhguru.

Mahashivaratri is considered to be spiritually the most auspicious of all Indian festivals. On this night, the northern hemisphere of the planet is positioned such that there is a natural upsurge of energy in the human system, pushing one towards their spiritual peak. It is therefore considered important to stay awake with the spine erect to benefit from this natural upsurge of energy. The forces of the night are agnostic to faith or religion making Mahashivaratri a universally significant night for all human beings, especially those on the spiritual path. About 600 people to support ‘Cauvery Calling’ campaign in Vizag In Conversation with the Mystic: Actor Nani interacts with Sadhguru 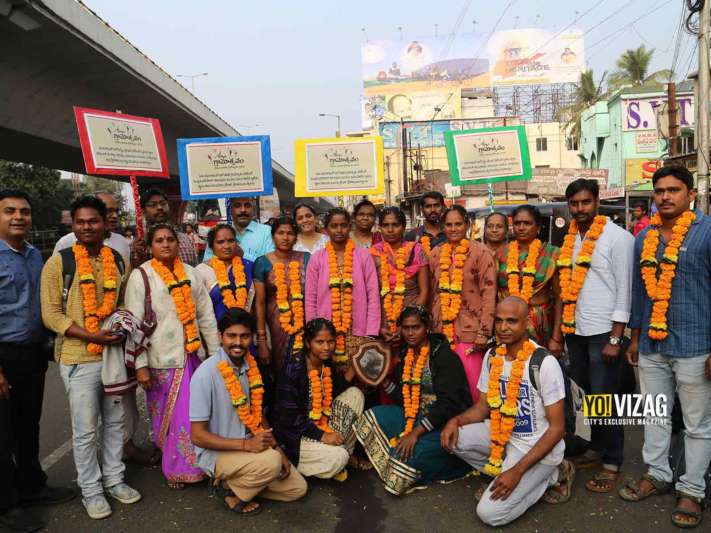