Popular Landmarks in Visakhapatnam that everyone has seen once

Popular Landmarks in Visakhapatnam that everyone has seen once Vizag – fondly called as the “Jewel of the East Coast” is the largest city of Andhra Pradesh, in terms of population and stretches over 682 square kilometres. This coastal city witnesses huge tourist footfall each year and reaching Vizag from any part of the country is not a problem. With growing demand for ease of travelling, the following 8 landmarks in Visakhapatnam will help you commute. The biggest mall in Vizag has a built-up area of 72,000 square feet and is spread over 5 floors. From hanging out & eating to buying groceries & home furniture, CMR central is a house to all. Located in Resapuvanipalem, Maddilapalem, CMR central is one of the first popular landmarks that you will come across in Visakhapatnam. Are you in a concrete jungle? Yes, you are in or around Dutt Island in Siripuram. A photo with HSBC building and the beautiful water fountains nearby will be your photo of the day. Siripuram circle also houses SBI bank, multi-level car parking, heritage restaurant, Waltair club and many more. It’s one of the popular commercial landmarks in Visakhapatnam. This temple of healing has served the needs of north coastal Andhra Pradesh and Odisha for more than 150 years now. KGH Govt. General Hospital is the largest and the busiest in Andhra Pradesh, given its infrastructure. A quick drive through Maharanipeta via KGH down road is the closest link to KGH. Maharanipeta, which houses KGH, is surrounded by Seethammadhara and Gopalapatnam mandals. 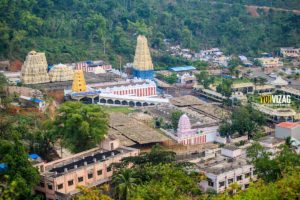 Originally called as Varaha Lakshmi Narsimha temple, Simhachalam is dedicated to the Hindu community of Andhra Pradesh. This temple boasts of an excellent hilltop location with lush greenery around. This holy place gives a spectacular view from a height of 800 metres above the sea level. Annual celebrations of Akshaya Tritiya mark the grandeur of the Simhachalam hilltop. It is an important religious landmark in Visakhapatnam. The urban park of Vizag, situated on the beach road in Jodugulapalem, is an ideal place for photographers. This park, which hosts the virgin beach of India has been used in several Hindi, Telugu and Oriya films. There are pathways that lead into the park and head down towards the sea. A quaint yellow gate shouldn’t let you miss the flight of stairs that lead down straight to the beach, where one can enjoy picturesque sunsets and strong waves from the beach of Tenneti park. 40 feet tall statue of Shiva and Parvathi are a major attraction of Kailasagiri. Ropeway rides up the hill enhance the experience and journey through the curved roads is equally enjoyable. Floral clock, Titanic Viewpoint , jungle trails, Shanti Ashram and Shanku Chakra Nama are few other major attractions around Kailasagiri. It’s one of the best landmarks in Visakhapatnam for families to visit. Naval Armament Depot road, this road played a sensitive role of procurement, storage, maintenance and timely supply of ammunition, from where it got its name. An important establishment near NAD junction is NSTL, another security area. NAD cross road connects Vizag with Simhachalam, Asilmetta, Pendurthi, and Maddilapalem with APSRTC bus routes easing commuting. This NAD depot road however got the name NAD junction for its traffic, shops and commercial establishments. And that’s what makes it a popular landmark in Visakhapatnam. This historic university is located in the heart of the city. This UGC accredited university has two sections and four constituent colleges. The only campus with 19 hostels for men and 4 hostels for women, AU is busy throughout the year with parents, relatives and friends meeting all over. It’s said, when you visit Vizag, forget your guide, but don’t forget an AU student, who has been to Vizag’s lighthouse.