The slender curve of her delicate wrist. The perfect to-die-for hourglass figure. The beautifully glossy hair with pretty flowers pinned to it. You look at her once and you can’t stop looking. No wonder she has reached over 50 lakh people on Facebook, she redefines popular. No wonder her maker won an award at the ‘All India Art Exhibition’ and a place in ‘The Indian Book of Records for paper sculptures.’ Stop. Rewind. Maker? Art? Paper model? Yes…She is the stunning paper mache model, a professional creation of Satish Kumar Moka, a private sector employee who left the comfort of a steady job four years ago to dive into the thrill of sculpting.

Satish started dabbling with the medium of sculpture making since he was a child. Coming from a family of technical people, he still isn’t sure how he and his younger brother fell in love with art. “We both have been involved with the arts since we were kids. While my younger brother Vijay enjoyed watercolours, I preferred sculpting,” he shares. However, his tryst with paper sculptures was much recent, and began ten years ago. Using the medium of international art paper he began dabbling with three-dimensional models and perfecting every detail. 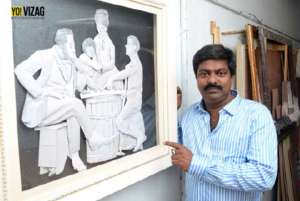 With a penchant for perfection, Satish would labour for hours on end, painstakingly on each work of art he crafted. Working as a private employee, he would dedicate daytime to his office, and the night time to this new-found love. He worked for hours on end and each work would take him a month to complete. “One month and ten hours per day on average,” he shares. But when you enjoy something you do, it doesn’t really seem like work, does it? And so he went on labouring long hours for days, months and years.

The efforts have definitely paid off for Satish, who sold the Indian lady’s portrait by mere chance. He was experimenting with this self-taught unusual form of sculpting when, a clinic opening demanded the portrait of a beautiful woman at the entrance. His brother shared Satish’s work and they were ecstatic on seeing it.

The ‘Indian lady’ portrait created in record time, attracted the attention of many. In fact, with people sharing the image online, it soon went viral on social media, garnering Satish Kumar the overnight awe-inspired attention of not just the city, but the world.

Today orders are coming from across cities and countries.

“However, it takes me a month on an average to complete such a work of art.” As you can guess, there’s a long line of people waiting to order a work of art with Satish. And it is no wonder. All you have to do is take a look at the first-of-its-kind portrait, and you couldn’t agree more.