Remember those old days, when spending all the summer vacation in front of the T.V was considered cool. How we sat in front of the cooler with cold drinks and Uncle Chips and spent the hot afternoons watching some amazing movies with our siblings and friends. Those old movies were so interesting that we had mugged up every dialogue from that movie script. Even today if we start watching these films, we cannot leave them in between and have to watch them till end. Here is a list of few film’s which are evergreen and will always remain our favourite.

This movie was always beyond words. The big house and the huge family was always GOALS. The song ABCD was played in every birthday party while we always grooved to it’s the title track. ‘Mare Hiwada Me Nache More’ feels odd though.

This film was the mother of all the thrill movies. Amitabh Bachchan proved himself to be the best of his era via this movie. ‘Yeh mera dil’ still makes our feet tap and remember how we enacted – Don ko pakadna mushkil hi nahi, namumkin hai. This was the least realistic cinema but still everybody connected well to this movie. The castle sized ‘Raichand house’ was the hub of all the ‘Sanskaar’ while Poo was our fav. Almost all the songs from this movie are amazing and the tongue twister ‘Chandu ke chacha ne’ made it more famous. Sholay was the movie which set Friendship goals. This movie had it all – love, romance, friendship, attitude and revenge. Thakur Sahab soon became the meme base for youngsters but deep inside we all loved his performance. Nobody can deny that Gabbar was more loved that Jay and Veeru and his evil laugh was copied by many. Not to forget – Kitne aadmi the! This film was all about the extreme efforts put by a mother for her kids and family. The limits she crosses to make a living were extremely unrealistic but we all enjoyed her performance of hard work. Even though this movie was more senti, we sure did enjoy it every time. Literally is there any movie better that this movie? Salman and Aamir were friendship inspiration and their dumb fu*kery always made us laugh. No matter how many times we have seen this movie, we do not have the audacity to change the channel when this movie is on. Akshay and Sunil made this movie a must to watch while ‘Baburai Ganpatrao Apte’ added all the spice. The anonymous phone calls were so dumb while Tabu added glam to the movie. This hilariously funny movie took away our hearts which had a collection of some bizzare songs – Mai ladka po po po and Hambalila hambalilo hambalile. LOL This multi starrer was the answer for all the depression. The funny scenes from the movie were watched again and again while Govinda added all the happy vibes to the film. The always broke families had a lot to teach while Juhi kept giving social messages. This film again was a multi starrer and was responsible for setting love and friendship goals high. The epic ‘pipe scene’ is still funny and the songs from this movie were amazing. Mr Lova Lova soon became our Jam while all the drama in the movie was bearable. The chaos and confusion in the movie was what made it stand aside from the group. This comedy film had many stars while Paresh Rawal was the best among them. This family entertainer can be seen again and again and will never disappoint you. 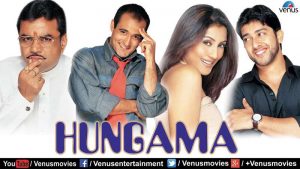 This is the epic love story of a boy who has a house the size of hotel while the girl lived in a village in a small house. ‘Kabootar ja ja ja’ was played in every weddings and gatherings while the weird step for ‘Yeh pagla hai’ always managed to make us laugh. BDW Salman khan looked HOT af in the movie.

This film made Hritik and Amisha huge in no time while the songs from this movie were excellent. The difference in family background shown was rather funny while we all tried the signature step of ‘Kaho na Pyaar hai’. Don’t we still dance to ‘Ek pal ka jeena’ and ‘Pyaar ki kashti me’! Do we even have words to explain this epic love story? The beautiful Karishma made the this cinema more appealing while Aamir impressed us with his innocent acting. All the songs from this movie are good but ‘Pardesi pardesi jaana nahi’ was on some different level. Now that you have a list of the most amazing movies from the 80’s and 90’s era, you can watch these movies again and again till the director of these movies asks you to stop. Have fun.