5 must watch movies of Leonardo DiCaprio

Leonardo DiCaprio is easily one of the most popular actors around the globe. Hailed as a versatile actor who can nail most of his roles to perfection, Leo, as he’s fondly called by his fans, has certainly emerged as a widely acclaimed actor, ever since he debuted with What’s Eating Gilbert Grape in 1993. The Hollywood star even bagged a long-awaited Academy honour for The Revenant in 2016. Here are 5 must watch movies of  Leonardo DiCaprio that no film lover can miss.

5 Must Watch movies of Leonardo DiCaprio 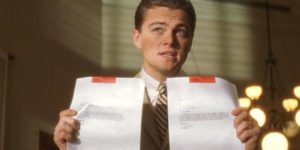 Catch Me If You Can has Leonardo DiCaprio excelling in the role of a teenage check forger, Frank Abagnale Jr. Pulling off a sensitive role, based on a real-life character, while sharing screen space with a seasoned actor such as Tom Hanks is no joke but boy doesn’t Leo get into the skin of the character! Arguably one of the best works of Hollywood, Inception is a sci-fi thriller like no other. A unique storyline that was masterfully crafted by Christopher Nolan, it had actors of high calibre essay the lead roles. Leonardo DiCaprio plays the “never-before-heard” role of a professional thief who plants ideas into humans by manipulating their minds. The role deals with the emotions of guilt and trauma which are hard to execute. However, Leo (being Leo), delivers a riveting performance once again. A film that portrays Leonardo DiCaprio with the darker shades of a character. Django Unchained has Leo playing a character that is unsympathetic, ruthless, and ferocious. A signature Quentin Tarantino piece that has its fair share of bloodshed, this film has DiCaprio’s performance as one of its mainstays.

#2 The Wolf of Wall Street

The duo of Leonardo DiCaprio and Martin Scorcese had once again teamed up to bring forward a black comedy that was based on the life of stockbroker Jordan Belfort. DiCaprio delivers one of his best performances and powers the film with his intense and passionate portrayal of the corrupt stockbroker. What’s Eating Gilbert Grape saw Leo bag his first Oscar nomination. Playing the role of a mentally impaired teenager, he once again manages to steal the thunder from a senior actor, Johnny Depp. Leonardo DiCaprio strikes a chord with the audience with this emotionally-fueled role, which easily stands out as one of his top works thus far.