Jr NTR’s latest movie, Jai Lava Kusa, has got the cash registers ringing since its release on last Thursday. The movie which is directed by KS Ravindra aka Bobby has received a positive word of mouth right from its premieres.

ai Lava Kusa released in 4000 screens worldwide and witnessed high occupancy on its first day. In fact, it even set a record opening for a non-Bahubali release by collecting around 32 crores. The movie has raked in a whopping 92 crores worldwide in its first five days and is racing towards the 100 crore mark.

Trade analyst Ramesh Bala tweeted the area-wise breakup of the movie’s earnings with AP and Telangana contributing the lion-share. 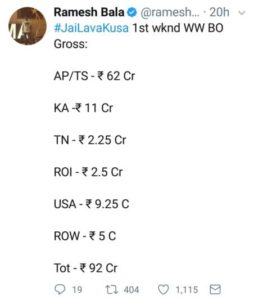 Interestingly, Jai Lava Kusa is Jr NTR’s third consecutive movie that crossed the 50-crore mark at the box office. His previous movies of Nannaku Prematho and Janatha Garage were also massive hits and collected more than 50-crores. In fact, Jr NTR is the first actor from Tollywood to star in three consecutive 50-crore share movies

Jr NTR is receiving wide scale appreciation for his portrayal of the Jai character. The character demanded special attributes which were pulled off by Tarak with effortless ease. Jai Lava Kusa faces competition from Mahesh Babu’s Spyder and Sharwanand’s Mahanubhavudu in the coming days. It’ll be interesting to see if the movie continues to go strong in spite of these big releases.