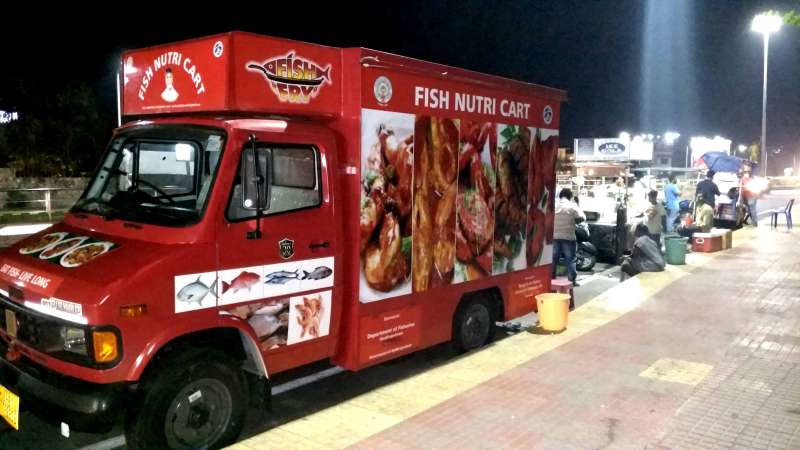 Fish Nutri Cart in Visakhapatnam and their woes with displacement

In a bid to promote marine products in the city, the fisherwomen collective from Mangamaripeta launched the Fish Nutri Cart food truck in April, with the help of District Collector and Joint Director of Fisheries. The truck was supposed to change the lives of these women and costed Rs 15.5 lakh for setting up – with the amount split between the fisherwomen and the government.

But reality seems far from that. Spotting the food truck near the Defence Quarters opposite VUDA Park one hot evening, we decided to approach it to find out how business was going. The first thing that seemed off was the fact that it wasn’t located at Beach Road, like it was supposed to. None-the-less we spoke to the women and found out their grief at the way things were running. One of the fisherwomen stated that they have written permissions from District Collector Pravin Kumar and Dr VV Rao, Joint Director of Fisheries for setting up their food truck at the Beach Road.

These women have spoken to the Collector on Monday, who diverted the issue to the Joint Director. One of the women stated that the Collector seemed surprised about their displacement. The Joint Director on the other hand told them that their place at Beach Road is confirmed so there shouldn’t be a problem. Apart from that, nothing really has been done to offer these women the safety and stability they desire. Other than the fact that their current location reduces their business by a significant margin, the women here face problems due to the nearest public toilet being the one at YMCA.

One of the women says, “We are not comfortable with this place. Business here is dull and despite working from 3 PM on Sunday we earned Rs 750 only. While we were placed at the YMCA, we earned close to Rs 2000 in 10 minutes alone. The nearest public toilet from here is near YMCA and it’s hard to leave business unattended and walk from here to there every time. Due to the same, I have been suffering from a UTI the past three days.”

The GVMC also doesn’t seem to be supportive of them parking their food truck where it is now and keeps asking them to shift elsewhere. The problem lies in the fact that these women have nowhere else to go. When asked about the reason for the cold treatment from the street food union at Beach Road these fisherwomen state that the union is averse to them having their food truck there as it would lessen the sales of all the other items sold along the Beach Road. “If we’re handed space at YMCA like we’re promised, we know we can earn a significant amount in an hour, some of the hawkers there easily earn Rs 2000 per 15 minutes.”

The last three months haven’t been an easy ride for these women either. They claim to have approached the Collector before and the same events transpired, but no solution was really brought forth. They remain thankful to the Collector and JD for all the encouragement and support they received when they first set up, but the lack of a permanent solution now has shaken up their lives. “If this is the scenario of a food truck that was set up with the support of the government, it’s surprising how others are even coping up,” one of them says.

But the women aren’t ready to budge. They realise the importance of having their own identities and independence. They say, “We don’t know what’ll happen or whom to blame for this. But we do know that we’re ready to work 24 hours if we’re provided with the place we were promised. We were simple housewives before the Collector and JD provided us with the opportunity to change our lives. We’ll let nothing stop us now.”