5 Doordarshan news readers who made saree and news famous!

5 Doordarshan news readers who made saree and news famous! 5 Doordarshan news readers who made saree and news famous: No chaos, no breaking news and no non-stop ‘100 news in a minute’ nonsense! Fact-based news and a show that was absolutely a delight to watch-just for its sheer presentation! We are talking about the time when Doordarshan had the rapt attention and the utmost professional news readers who brought- urban and rural, literate and illiterate together at one place, which was in front of the television!

Here, we are talking about the top-5 news readers of Doordarshan who’d set a benchmark that is hard to beat even until now! Catapulted to fame and name, they managed to win the hearts of billions with their personal style and sheer elegance!

The lady with a rose tucked in her hair! We found her once at BharatSthali sarees store along with the entire family. Her news reading and her style were impeccable and unique. She fondly remembers how she would get letters from poor husbands pleading her not to wear a new saree every day, for, the wives would demand the same from them! Her quiet yet efficient way of delivering news was a breeze of fresh air! She was hardly seen accessorising her saree with as much as even a necklace! Often sporting Gujarati style saree, she made it look all simple and effortless- much like her style.

She was handpicked from the AIR. Her command of the language and impeccable English accent thrust her to the fore. Her bob-cut hair and saree became a hot trend! For the uninitiated, she is the voice of Delhi Metro. Clad in silk sarees, her signature was the pallu that she would wrap around and tuck in the waist. Her elaborate hairstyle was also a thing of fascination! 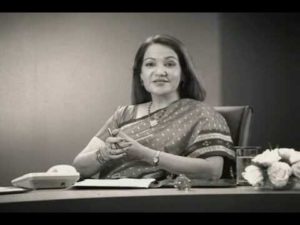 Her easy and patient style of commentary made her one of the most popular news presenters of her times. She delivered commentary on the swearing-in ceremony of two presidents as well as on the unfortunate demise of former Prime Minister Rajiv Gandhi. Her trademark style is her handloom sarees that add to her charm and aura.

Thanks to these efficient and professional women, watching news became a family affair! They made news and saree-both popular and mainstream! From people putting wagers on the colour of the saree, a news presenter would wear for next telecast to the demands of ‘wo saree jo uss news presenter ne pheni thi,’ – they sure brought some interesting time and fashion to the fore! Fake electrician and plumber arrested for robbery in MVP, Visakhapatnam