Visakhapatnam can now lie back as Yo! Vizag has spoken to the officials at the Cyclone Warning Center here and the threatening wind system has moved towards Odisha. Their latest reports indicate depression is not likely to intensify into a cyclone but a deep depression that will make landfall between Puri and Chandbali in Odisha.

Visakhapatnam can expect to receive strong winds reaching sixty five kmph which are likely to prevail along North Coastal Andhra Pradesh. The sea state is going to be very rough and people here are expected to keep away from the sea shore. The depression will be causing rainfall and winds at the speed of 65 kph. The city is likely to experience showers from tonight onwards and winds tomorrow.

Earlier – While the threat of a cyclone is still circulating in Visakhapatnam and people are following the weather report closely, this comes as a welcoming news. 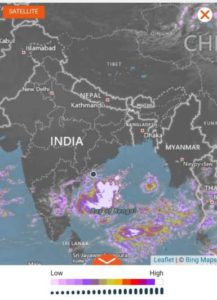 As per the Indian Meteorological Department (IMD), the district of Visakhapatnam in Andhra Pradesh is in for some heavy showers in the coming days and there have been warnings till yesterday of another Cyclone in Vizag. The IMD has informed us of a low-pressure region that is formed over the central part of the Bay of Bengal.

The below image from accuweather depicts yesterday’s low pressure area. As per the officials, “There is a definite low pressure that has formed over west-central and adjoining parts of Bay of Bengal and it is likely to intensify into a depression in the next 24 hours. It is likely to affect North Andhra and South Odisha but given the wind speeds it is definitely not a cyclone warning.”

Phew… the memories of the devastating cyclone are still fresh and while weather can suddenly change, we can be happy about the news at hand. Rest assured we shall keep one and all updated.