From boating in the blue waters to shopping for Jamdani saris, Jaya Siva Murty shares the memories of the Craft Council of Andhra Pradesh trip to Jamdani Festival in Bangladesh.

An excuse for travel, always makes a trip much more exciting. So when the Jamdani Festival, Dhaka, Bangladesh came up, our group of six from Craft Council of Andhra Pradesh jumped at it. ‘Jamdani’ literally translating to mean a pot of flowers, is an intricate form of handicraft and handloom from this region. And while this was the key factor to our trip, a few Google searches later, we chalked out a stunning list on all we could see and do in this country. Having booked accommodations via Airbnb, we finally landed for a weeklong trip. After currency changes at the airport, we stepped out into a country that was so like India. However, the marked differences soon started crossing our path. From the number plates on vehicles to the signboards on shops, there was a predominance of Bangla. Even our driver spoke broken phrases of Hindi. So with a cocktail of Hindi, English, Bangla and plenty of gesticulations, we soon headed to our homestay.

The city of Dhaka Whether it be its sights, sounds or smells, Dhaka, or Dacca as it was once known is different in many ways. This capital city of Bangladesh, is one of the largest and most densely populated cities in the world. Deciding to explore the region, local style, we opted for rickshaw and auto rides. With both these reminding you of Shahrukh Khan from ‘Main hoon na’, rides can be a little scary, as the rickshaws maneuver pot holes and race with other vehicles to get you ahead. After our first two rides, we soon learnt to hold on and balance ourselves. We also came to know that autos were called CNGs. The best way to travel here is definitely by Uber, which gets you the best rates, and comfortable rides. With the local ricks and autos however, you may want to brush-up your haggling skills. Local food was next on our agenda, and it was tough to pass up the ‘Aamra’ and the guava that most sellers were offering on the roadside. Aamra, which looks like a mango, tasted perfect with the mustard sauce, and the guavas were a treat too. Parathas were another food that each of us loved along with the non vegetarian fare. Those with a sweet tooth, indulged in the mishti doi and rosogullas. Other than that, the usual Indian fare is available, and one can dine in the food courts or chosen restaurants. The centrepiece of our trip was the Jamdani Festival. This thousand year old handloom, is being revived to its former glory. A collective effort by the Bengal Foundation, National Crafts Council of Bangladesh, and retail houses of Kumudini, Aarong, Tangail kutir and Aaranya; the Jamdani Festival was a treat to the eyes. The concept was to recreate the age old traditional saris, with the same finesse, using a younger group of artisans. With mastercraftsmen, supervisors and apprentices teaming up, a few select designs were replicated using similar thread counts, reed counts and materials. The intricate weaves which took from two months to nine months, were then displayed along with the old saris. The end result was breathtaking, and was displayed along with videos of the process that went into it.
Jamdani, involves the craft of intricately woven motifs over the pit loom, and Bangladesh’s economy thrives on it. Woven using the weft technique, this work is both painstaking and stunning to look at. Once passed on from a father to a son (master to apprentice), now it is also being passed on to the daughters and to people outside the weavers community. The patterns are usually done as floral motifs. Intrigued by the end result, we visited the Jamdani Village, to experience the process. The blue waters of the Buriganga river were inviting, and we also stopped for a short ride on the way. When we reached, rows of people bent on looms, each managing to create an inch of the sari’s width everyday with intricate motifs, reflected the sheer hardwork that goes into it.
Local sightseeing 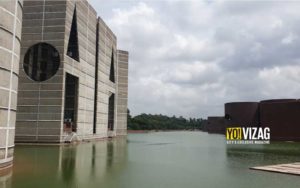 There’s plenty to see in Dhaka, and when we realised that our itinerary was too adventurous for our short week-long stay, we decided to thoroughly explore the city. We visited the Sadarghat port on Buriganga river, Lalbagh fort, the mosque, the Dhaakeshwari Temple and the Jatiya Sangsad Bhavan. The last was the most stunning for us, as it was a manmade marvel in a natural habitat. Previous permissions are needed for visiting the Sangsad Bhavan or the National Parliament House, which is an architectural marvel in the midst of a natural lake. With its construction beginning in 1961, when Bangladesh was still East Pakistan, renowned architect Louis Kahn, was entrusted with its construction. Using the natural elements of the lake and sunlight to its advantage, the construction was halted in 1971 during the Bangladesh liberation war, and was completed only by 1982. With nine individual and eight peripheral blocks, and a central octagonal structure, all are interlinked to form one unit. The National Museum was another point of interest. Chalking the chronological events of Bangladesh’s freedom struggle, displaying its arts and crafts, its muslin and woodwork, was a real treat to the eyes. Finally, our trip included the Panam city in Sonargaon, where the rich merchants were once known to live. Today, the century old buildings remain as old ruins, yet reflect the rich tastes of the people in those times. No trip is complete without shopping. Having visited the land where the intricate craft of Jamdani was born, and passed down the generations, the members of Craft Council of Andhra Pradesh indulged in shopping for the beautiful drapes in stunning colours. Tangail’s cottons, Nakshi-katha handwork, woodwork and block printing with vegetable dyes, all captured our attention. Culture and crafts continue to hold high importance in this country, and we could witness them in their glory here. From the busy lanes of New Market, to Bailey’s Road and the various handloom stores, we visited as many places as we could.
Dhaka, and the country of Bangladesh, may not be the dream destination for most tourists. However, it is a country that has beautiful landscapes and a helpful community of people. It has a character that’s unique and crafts that make it special. And a trip here, can enrich both the mind and soul.