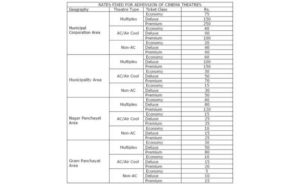 Over the last six months, several senior actors, film directors, and producers have appealed to the AP State Government to reconsider the decision. Despite their efforts of trying to get on terms with the AP State Government, the decision remains unchanged. Movie distributors, exhibitors, and theatre owners have openly expressed their dissatisfaction with the decision to cut down the movie ticket rates by a significant margin.

On 14 December, 2021, The Andhra Pradesh High Court dismissed the AP State Government’s GO No. 35. This decision by HC implied that the movie ticket rates shall be priced according to old regulations. The theatre owners were represented by senior lawyers Adi Narayana Rao and Durga Prasad. On 28 December, 2021 the AP State Government established a committee made up of all parties to regulate the movie ticket rates. The film fraternity had requested a meeting with Chief Minister Y.S. Jagan Mohan Reddy to resolve this issue..

Kill black money, tax legal earning, tell your followers to go to the cinema and support a struggling business. Please.

If you cant, thats fine…but please again, leave the film making and film business to itself.#FreeMarket#LeaveCinemaAlone

Previously, actor turned politician, Pawan Kalyan, actors Siddharth and Nani have expressed their dissatisfaction over the decision on stage, being the first ones to do so. Film director Ram Gopal Varma recently concluded a meeting with Minister Perni Nani, during which discussions regarding the AP ticket rates issue took place.

Happy to inform that I have been invited by the honourable cinematography minister to the Amaravati Secretariat on January 10 th afternoon ….Thank u @perni_nani Garu for your kind initiative to exchange views on the AP ticket pricing for an amicable solution💐