As part of “SIMBEX-17’, the ongoing Bilateral Naval Exercise between Navies of the Republic of Singapore and India, lndian Naval Ships Shivalik, Sahyadri, Jyoti and Kamorta and one P8-I Maritime Patrol and Anti-Submarine Warfare Aircraft are participating. While INS Sahyadri and INS Kamorta arrived on May 12, 2017, INS Shivalik and INS Jyoti would be joining directly for the sea phase. The ships are under the command of Rear Admiral Biswajit Dasgupta, YSM, VSM, Flag Officer Commanding Eastern Fleet. SIMBEX is an acronym for “Singapore-India Maritime Bilateral Exercises”. Bilateral cooperation between Singapore and India was first formalised when RSN ships began training with the Indian Navy in 1994. This year’s edition of SIMBEX-17 being held in the South China Sea would be the 24th in the series and is aimed to increase interoperability amongst the RSN and IN as well as develop common understanding and procedures for maritime security operations. The scope of the current exercise includes wide-ranging professional interactions during the Harbour Phase scheduled from May 18 to May 20 and a diverse range of operational activities at sea during the Sea Phase to be held from 21 May to 24 May. The thrust of exercises at sea this year would be on Anti-Submarine Warfare (ASW), integrated operations with Surface, Air and Sub-surface forces, Air Defence and Surface Encounter Exercises.

During SlMBEX-17, the Singapore Navy is represented by RSN Ships Supreme, Formidable and Victory and Maritime Patrol Aircraft Fokker F50 in addition to the RSAF F-16 aircraft. 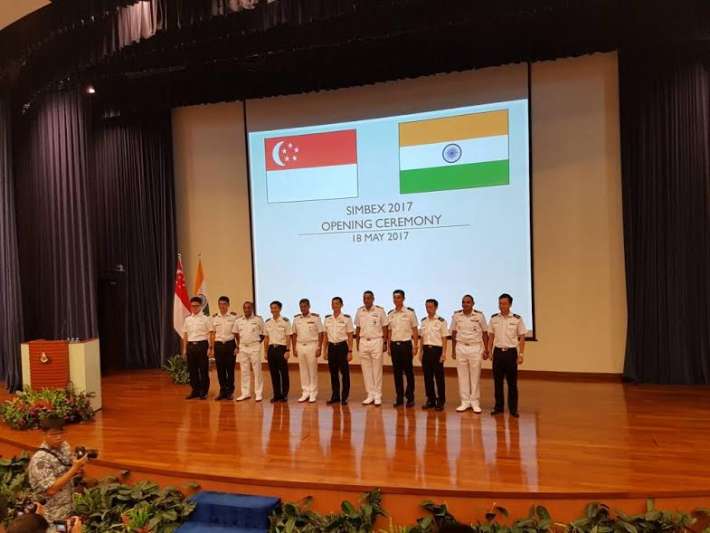 The two navies share a long standing relationship with regular professional interactions that include exchange programs, staff talks and training courses. Singapore Chief of Naval Staff, Admiral Lai Chung Han had earlier visited ENC and participated in lFR-16 held in February last year in the City of Destiny, Visakhapatnam. RSS Formidable and a Fokker F 50 aircraft participated in SlMBEX-16 which was held at Visakhapatnam and in Bay of Bengal. The above information is from a press note and Yo! Vizag hasn’t edited it.