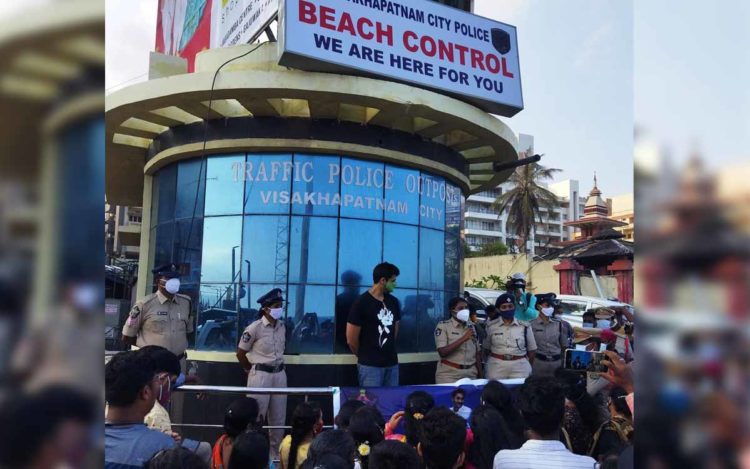 This Sunday, citizens of Visakhapatnam were greeted by popular Tollywood actor Adivi Sesh. Marking Raksha Bandhan, the actor visited RK beach and took part in an awareness program by the Vizag City Police on the ‘Disha SOS App’ held near the Kalimata temple.  A large number of girl students and women gathered for the event, where they would get to learn how to use the Disha App for emergency purposes.

Addressing the citizens, Adivi Sesh asked every woman/girl in the city to install the Disha App on their mobiles and register in the app, which can be used during any emergency. Opening the Disha App, he gave a demo to the people on how to use the app during an emergency and get help within minutes. Adivi Sesh expressed happiness on interacting with the women of Visakhapatnam on the occasion of Raksha Bandhan.

According to Disha ACP Prem Kajal IPS, a total of 4.3 lakh individuals have downloaded the Disha App. So far, 17,000 SOS requests have been received. Around 294 were kept under assigned calls and 31 cases were registered with a FIR. A total of 161 areas in the city have been identified as vulnerable areas and among these, 24 areas are the most vulnerable hotspots. In particular, Thotlakonda, Bavikonda, Appikonda, Yarada, Gangavaram Port, IT SEZ, Fishing Harbour, Sagar Nagar, Erra Matti Dibbalu and Pendurthi outskirts are some of the areas where the Disha teams are on high alert.

Also, Disha teams are taking up counselling and awareness workshops on the Disha App at various colleges in the city and IT companies located at IT SEZ. With the schools in the city resuming, teams are planning to take up a workshop about Disha App for the girl students who will be travelling alone to and fro from school.