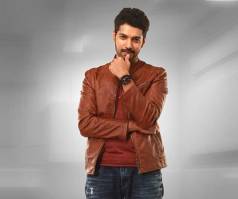 In a tête-à-tête with Yo! Vizag, Vizag lad actor Karthik Raju, gets talking about his venture into films, his producer dad and his love for the city.

Born and brought up in Chennai, conversation with Karthik is just like talking to your good old friend. Practically growing up amidst a cameras-and-cinema-everywhere atmosphere, his family consists of a producer/distributor father and mother.

Want-to-become-an-actor chords were struck when he turned eight to be precise and that spark was always lingering right there since childhood, which lead him to watching lots of movies, a trend that still continues. ‘Voila! I’m here’, he retorts.

Born into a movie family, Karthik says that he is constantly under spotlight and cinema is nothing new to him.

Cinema is all based on sheer luck along with hard work. Poor luck shifted them below the poverty line for a brief span, when his distributor father turned producer, only to incur huge losses, which they survived by just drinking water for about a week, shares the young Vizag lad.

Despite hailing from showbiz, the young hero left no stone unturned to hone his skills. Well trained under Satyanand, he mastered the dance moves and became an actor, he says.

Owing to his family’s lineage, he made his debut with ‘Tippu’ last year. Despite, the film not doing really well, he received accolades for his presence by the who’s who of the industry and is on a roll this year.

The actor currently finished shooting for a film directed by Chunia, which is slated to release soon. Another multilingual project is on the cards echoes Karthik who is waiting for a breakthrough to set for himself an image as a promising actor.

Yo! Moments in the city

Karthik gets all-nostalgic talking about the city and memories entwined with it. As they say, food gets you fall in love with the place all over again; he never fails to cram his tummy with the famous raju gari kodi pulao and ulavacharu biryani when in town. Watching the sun rise and set and jogging by the beach are his favourite to-dos. ‘People in Vizag are more like family’, he reminisces.