Bollywood recently has been running a trend of producing star-studded, big-budget films that don’t live up to their potential. The story of Bollywood, of late, has been one of biopics and remakes. Despite that, every now and then, the industry yields its fair share of good movies. Some of these set the box office alight, mainly due to their star power, and mint crores at ease. Other underrated Bollywood movies rely on their story to impress the few and far between who don’t go to theatres because of a favourite star. With 2019 soon coming to a close, here’s a glance at the underrated Hindi films of this year.

This adaptation of Mohd. Amin Bhat’s play Phone No 786 chronicles a father-son relationship with a gruelling war background. Directed by Aijaz Khan, Hamid beautifully captures the many ways in which humans choose to deal with death. Premiering at the Jio MAMI 20th Mumbai Film Festival, this indie film found love and appreciation within the entire Hindi film fraternity and received rave reviews from critics. It went on to win the National Film Award 2019 in the best Urdu film category. Starring the dynamic combo of Nawazuddin Siddiqui and Sanya Malhotra, this film is directed by Ritesh Batra of ‘The Lunchbox’ fame. It treads an unlikely connection between a street photographer and a student hailing from a middle-class family. A step away from the typical Indian romance, this film touches multiple hearts with its soft portrayal of middle-class urban lives in India. Focussing on an issue that needs to be discussed further, ‘Section 375’ achieves what any typical courtroom drama does- it got the viewers hooked with the very first scene. Fierce performances from Akshaye Khanna and Richa Chaddha maintain the tempo with the help of a fluent plotline. Released alongside commercial films like Chhichhore and Dream Girl, Section 375 failed at the box office but impressed the critics. 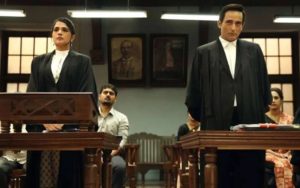 This tear-jerker is the story of a well-glued family and portrays the struggles of a couple whose daughter suffers from a terminal disease. Priyanka Chopra Jonas and Farhan Akhtar give convincing performances but the true highlight of the film is Zaira Wasim’s portrayal in her very last film. Before Bala and Ujda Chaman began their hilarious duel, Gone Kesh provided a very true depiction of the life of a teenage girl suffering from baldness. While director Qasim Khallow impresses in his first outing, Shweta Tripathi owns the character of Enakshi and makes this film one of the underrated Bollywood movies. Touted as India’s answer to Deadpool, Mard Ko Dard Nahi Hota is about a rare medical condition called Congenital insensitivity to pain and chronicles the lead’s comical struggles with this condition. After receiving accolades at numerous film festivals around the world, this film had a quiet theatrical release. Critics were impressed by Vasan Bala’s direction and the performances of debutant Abhimanyu Dassani and Radhika Madan. Set in the deserted Chambal ravines of India, Sonchiriya focuses on the moral conflict faced by a dacoit. Highlighting themes of domestic abuse and rebellion, the film remains gripping throughout and happens to be one of the underrated movies coming out of Bollywood this year. The ensemble cast consisting of Sushant Singh Rajput, Bhumi Pednekar, Manoj Bajpayee, and Ashutosh Rana does justice to the film’s plot and Abhishek Chaubey delivers yet another critically-acclaimed film after Udta Punjab and A Death in the Gunj.