Home » Entertainment » 5 horror movies that you need to watch ASAP

5 horror movies that you need to watch ASAP Do you fear puppets? If yes, this movie is definitely not for you!  This story revolves around a man whose wife is dead in an incongruous way, returns to his hometown to unwrap the mysteries. James Wan’s supernatural horror ‘Dead Silence’ will make you feel that ventriloquism is not outdated. A film that will haunt you throughout its runtime. A young girl has to stay awake at any cost in order to save herself from a psychotic killer. Directed by Wes Craven, this film still has a cult following. Based on Stephen King’s novel of the same name, Stanley Kubrick’s The Shining is regarded as one of the all-time classics in the horror genre. From the typical jump-scares to Jack Nicholson’s spine-chilling act, The Shining still stands as a masterpiece from Kubrick’s canon. ‘Orphan’ is a psychological thriller directed by Jaume Collet-Serra. The story revolves around a couple who lose their child and adopts a 9-year-old girl. They soon realize that she is not a normal, innocent girl as she pretends to be. There’s a whole different side to her. If you’re looking for some serious horror, this is a must-to-watch. 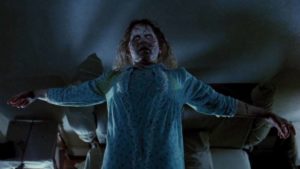 William Friedkin’s ‘The Exorcist’ is an American horror film based on William Peter Blatty’s novel that goes by the same name. This story is about a possessed 12-year old girl, whose mother, with the help of two priests tries to help her daughter by conducting an exorcism. This movie is ingenious, well-contrived, making it one of the best horror films of all time.

Now that you have the list of the must watch horror movies, switch off the lights and grab a blanket to set the mood right.

Disclaimer-The views expressed here are solely of the author’s.