Halloween 2020 is fast approaching, and it’s never too early to start celebrating. To make your at-home Halloween experience more enjoyable, Netflix has stacked up plenty of horror movies and shows for this month. We are here with the list of Halloween movies and series on Netflix this October, to mark the spirit of the season.

5 Halloween movies and series on Netflix that promise a thrilling October:

Directed by José Henrique Fonseca, the Brazilian web series is based on the novel of the same name. The series will follow the story of Verônica Torres, a police secretary who works at a homicide police station in São Paulo. She witnesses the shocking suicide of a young woman, after which things take a dramatic turn as she receives an anonymous call requesting for help.

Netflix has a freaky possession movie coming down the line! This Italian horror movie revolves around the life of a woman who travels to the southern part of Italy to meet her mother-in-law. The rest of the story encapsulates her fight against all the mysterious and spiteful curse determined to claim her daughter.

After scoring rave reviews for his indie – Uncut Gems, Adam Sandler is all set to come back in his element with Netflix’s Hubie Halloween. In his latest outing, he plays Hubie DuBois, a well-intentioned but frequently-mocked community volunteer who spends each Halloween exhaustively ensuring his neighbours celebrate the holiday safely. The horror-comedy also stars Kevin James, Julie Bowen, Maya Rudolph, Kenan Thompson, Tim Meadows, and Stranger Things’ Noah Schnapp.

#4 Haunting of the Bly Manor

Following-up to 2018’s spooky success of The Haunting of Hill House, its showrunner Mike Flanagan is all set to enthrall the audience with the second installment of the anthology. Offering his take on the classic gothic novel, The Turning of the Screw, with the latest series, the filmmaker is recycling cast members from the first season to take on new roles, with Victoria Pedretti and Oliver Jackson-Cohen as the leads.

Based on the iconic gothic novel by Daphne du Maurier, Rebecca stars Lily James and Armie Hammer as the lead. The plot traces the journey of a newlywed couple, with James’ character struggling to live in the shadow of her new husband’s deceased wife, Rebecca. 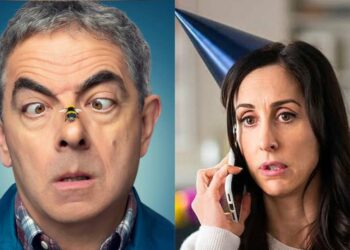