Be it a reality show or a movie event, the one word that has most extensively been used amongst the Telugu entertainment industry, as a whole is – ‘Thaggedhe Le’. With every snippet from the film being remade, talked about and shared widely on social media, Pushpa’s filmmakers dropped yet another snippet from the pan India film. This time, the Pushpa trailer itself.

Starring Allu Arjun in a never-before-seen avatar, Pushpa centres around the red sanders smuggling in the Seshachalam Hills of Andhra Pradesh. To add to all the excitement, this movie will mark Malayalam actor Fahadh Faasil’s Telugu debut. Faasil will be playing the antagonist in this movie which also stars Rashmika Mandanna, as the female lead, Jagapathi Babu and Prakash Raj.

The film was initially supposed to be shot in Kerala. But due to Covid-19 travel restrictions, Pushpa was primarily shot in Andhra Pradesh, with one important schedule in the Maredumilli Forest.

Pushpa has been announced to be a two-part story, with the first part releasing in 2021 and the second part in 2022. The first part of Pushpa, directed by Sukumar, is now slated to release near Christmas i.e., 17 December 2021.

The first part has been titled “Pushpa – The Rise Part- 1”. Ever since the first snippet release, the movie title has been trending on social media with the hashtag #ThaggedheLe. With every face reveal, this film has been sending ripples across the Indian film industry.

Here are the biggest face reveals of Pushpa – The Rise Part- 1:

A Rocking Number with Icon Star @alluarjun & @Samanthaprabhu2 being shot in a gigantic set ?

Presenting the face of evil ?

She is arrogance and pride personified! 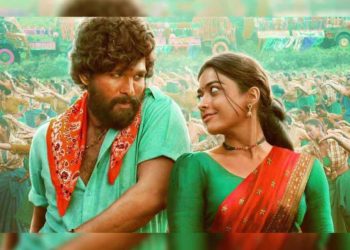 Pushpa OTT Release: On which platform will the Allu Arjun starrer release?