An expedition to the last village of India When tourists make a beeline for leisure trips to glamorous hotels, a professor from Vizag goes on an expedition to the Himalayas. Radha Rani narrates her adventure of fulfilling a forgotten dream to Alisha Roy.

A bed of wildflowers bloom against blue skies and scented breezes ruffle yellow and purple petals within stretches of green. Amid such a profusion of beauty; Radha Devi, Assistant Dean and Professor from Bullayya College in Vizag, made her lifelong dream a reality. She had reached ‘The Valley of Flowers,’ nestled in the tranquillity of the Himalayas. 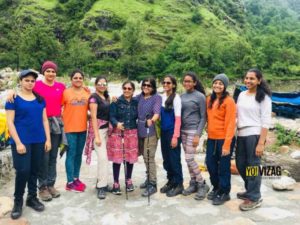 All of 46, the professor feared to get ‘’too old to take on this expedition.’’ This haunting notion motivated her nonetheless; to tramp steep paths through drizzle and impenetrable fog.

Accustomed to roughing the trail, Radha juggled between the demands of a metropolis lifestyle and her love for trekking. She trekked locally on Kambalakonda, Simhachalam and Madhavadhara in Vizag under the guidance of the Visakha Trekking and Sports Association. Soon after her return from the Sinhagad Peak and Pandavleni Caves in Maharashtra, she joined the ‘India Trekking Community’ to answer the call of the mountain.

A group of 23 others accompanied Radha in trekking across rivers and winding roads to reach this fairyland. The youngest in her team was 13 and the oldest was 70. Well aware that the Valley was a photographer’s paradise; she roped in her niece and nephew as the group’s photographers. Radha endured a two-month fitness regime in a haphazard urban terrain before taking on this physically demanding journey. She walked 10kms every day in Muralinagar, sharing these tiny feats with her hiking community through the ‘Nike Run Club App.’

Her trekking coordinator emailed her constantly to improve her diet and help her acquire necessary equipment. Her efforts had to please her trek coordinator and her doctors, who deemed her fit enough for a high elevation trek. Ailments like hypothyroidism and a weak Achilles tendon didn’t douse Radha’s enthusiasm that motivated 16 women from Vizag to join her.

However, this was her first high altitude climb. With edible camphor from Purna Market in Vizag to ease her breathing during ascends, she realised later that the entire route leading to the Valley was dotted with medicinal herbs.

The promise of nascent mountain valleys punctuated with waterfalls excited the Professor and her team as they departed for Delhi on the July 6. The following day, she and her group boarded a train to Haridwar which raced with the dawn of the July 7.

A 12-hour-journey by road to Govindghat ensued. The first trek was an 11 km trail which ended in the team’s base camp in the sweltering village of Gangaria in Uttarakhand region. After a night of dehydration, the team set off for the Valley of Flowers, the next day.

“Some of us in the group had never been exposed to low temperatures,” Radha says, as she was advised to carry extra woollen and thermal clothes. “We hired trek polls with LED lights to prepare for unpredictable weather as this was a monsoon trek,” she shares.

The Valley is a UNESCO World Heritage Site which is accessible only during the rainy months of July, August and September and remains cut off during winters.

The Valley gives way to 8km of multicoloured plain at 3500m above sea level. Describing the summit as “a slice of heaven,” Radha was literally above the clouds; unravelling snow-clad mountains and pristine glaciers.

“The valley has not yet been commercialised and is frequented by seasoned trekkers and misanthropes,” she says. After the squad had absorbed every bit of the Valley’s natural bounty; they called it a day and sang the national anthem at this psychedelic summit. The most challenging part of the trek was yet to unfold in a bifurcated path from Gangaria which led to Gurudwara Hemkund Sahib. The high altitude made sure that Radha quickly ran out of breath. She dismissed the idea of hiring a mule to complete the journey. Armed with determination and a trek pole, she trudged along the rest of the trail.

“One wrong step on the narrow path meant imminent death,” she exclaims. “I wasn’t allowed to sit; instead, the trek leaders advised me to rest by leaning on my trek pole,” she recalls.

Reaching the end of the rugged terrain; an ecstatic Radha kissed her hiking shoes and hugged her team. She broke into tears when she prostrated at the Gurudwara in sub-zero temperatures. The group celebrated the end of the expedition with hot tea in the tiny hamlet of Mala, the last village of India, close to the Chinese border. Cultures became increasingly Indian after the women in the group donned sarees and salwar kurtas. Anxious that the trip was at its end, the group members shared contact details whilst stargazing for the last time.

After winding up the expedition, the team made a quick stop at Badrinath, as they descended 11km downhill from Gangaria to Govindghat. Overcome by fatigue, the older group members decided to hire a chopper.  Due to prevailing bad weather, descending on the backs of mules was the only alternative left.

The Himalayan range is a biosphere reserve which has many takers from environmentalists to nature lovers. Radha was satisfied with the administration’s strict measures to keep the area plastic-free. She collected trash and filled up her eco bag in what she said was “her duty to preserve the charisma of the Himalayas.”

The plastic-free zone turned out to be a hurdle, especially for women in the group. “The physical stress that younger women in the group endured, hastened menstruation,” she remarks. Over the week, the women accumulated used sanitary napkins in eco-friendly bags during the expedition. After a steep descent, they finally had the chance to dispose of all the plastic in Uttarakhand’s nearest city.

The prolonged lack of contact from civilization had its perks. The group spotted the rare Bhrahma kamalam flower alongside the freezing Hemkund Saheb Lake. They relished in icy drinks from Himalayan rivers like Alaknanda, Saraswati, Manasarovar and Prayag, that meandered along their path.

Upon her return from this visual treat, Radha claimed better physical and emotional health. She was overwhelmed by the miracles of willpower and transformed by the love of nature that glued 24 strangers who became friends for life.

“It was a unique experience cut of a new cloth”, according to the ‘young professor,’ as she prefers to be noted now. Transitioning back to work, the Assistant Dean is currently preparing to visit the Hamta Pass. the Professor is eager to go on another expedition with an ‘all Vizag troupe’ back to the beloved Himalayas which were once just a dream.