Standing tall as one of the significant events in the maritime history of Vizag, the International Fleet Review (IFR) 2016 was the largest ever military congregation held on Indian soil. This maritime exercise, hosted by the Eastern Naval Command (ENC), witnessed 48 navies (including India) represented by 23 Chiefs of Navies, 24 foreign warships, and 25 Heads of Delegations. In the presence of the Prime Minister, Narendra Modi, the then Chief Justice of India, TS Thakur, and other dignitaries, the four-day event was a rousing success. If this achievement was a feat in itself, the fact that Vizag hosted IFR 2016 just 15 months after the devastating Cyclone Hudhud proved the resilience of the city. As Vizag is now set to host two more prestigious naval exercises, Presidential Fleet Review 2022 and Milan 2022, let us look back at when the International Fleet Review took place in the city.

In 2014, the Indian Navy sought an approval from the Indian Prime Minister, Narendra Modi, to host the IFR. By July, the approval came through and Vizag was chosen as the destination. However, tragedy struck when the ‘very severe cyclonic storm’ Hudhud struck the city on 12 October, 2014 and wreaked havoc all around. The blustery winds, at a high speed of over 200+ km/hr, ran amok over the land, destroying everything in its path. The extent of the damage that it caused to citizens, and the city, was almost unimaginable. Not a single tree in Vizag Steel Township and Andhra University withstood nature’s fury. Traffic jams, due to road-blocks, power outage, communication disruptions, infrastructure damage, lack of provisions, and all such impediments, stormed the city. Rising to the occasion, the Eastern Naval Command (ENC) stood on the forefront, by providing manpower, equipment, water, food, medicines, and repair tools to the residents of Vizag. This also included clearing the debris at the city airport to make the runway functional again. ENC further provided technical teams to assist in restoration of essential supplies, road clearance and to provide accessibility. About 500 personnel from ships were deployed for over a week to restore normalcy.

While the city was recovering from the brutality of the cyclone, the clock started ticking for the International Fleet Review, slated to take place in 2016. While there were talks of shifting the venue, the Andhra Pradesh State Government and the Indian Navy came together to resurrect and equip the city to host this prestigious maritime exercise.

The famous RK Beach in the city was chosen to be the venue of IFR 2016. With cleanliness as the top priority, special teams were deployed to keep the roads spick and span. The clean streets, the enhanced greenery, the vibrant LED lights, and the largesse of it all, amped up the charm of the City of Destiny.

Enthralling the onlookers, the Indian Navy put its maritime prowess on display through an Operational Demonstration. This was followed by an International City Parade. The IFR village, set up during the event was also a huge attraction for people. With 102 stalls from different states across the country, the village showcased the range of Indian handicrafts, art and dance forms along with food.

This maritime exhibition acted as the perfect platform for the 74 stalls which showcased the Indian Navy’s self-reliance. Indian industries and organizations like BHEL, BDL, and HAL were also a part of this event. 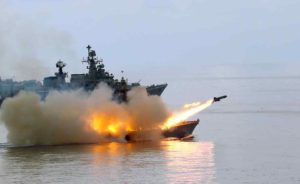 Displaying a patriotic fervour, huge crowds witnessed the exercise, beating the expectations of the organisers. As a whole, the International Fleet Review 2016 turned out to be a huge success and it remains a significant milestone in Vizag’s maritime history.

The piece has been put together with the inputs of Commodore Srikant Kesnur and the archives of the Indian Navy. Commodore Srikant Kesnur, an alumnus of National Defence Academy, is a serving navy officer with more than 35 years of experience in many assignments. He has commanded two frontline warships, served as faculty in prestigious military institutions, and had done a diplomatic tenure in East Africa. Deeply interested in naval and maritime history, he has been Chief Editor/Lead Writer of nine books and several journals produced by the Navy. A PhD from Mumbai University, he also holds five other post graduate degrees in sciences and social sciences. He is currently the Officer In Charge Naval History Project. He was awarded the Vishisht Seva Medal in the Republic Day honours of 2021.