Throwback Vizag: A flashback of all that happened in the last decade

Throwback Vizag: A flashback of all that happened in the city in the last decade As we bid adieu to the decade of 2010-19, Vizag emerges as one of the places in the country that has seen tremendous development. The city has changed so much over the years that someone, who had visited a decade ago, might not be able to recognise it anymore. Here’s a glance at all that Vizag has proudly witnessed in the past.

A flashback of the decade in Vizag: 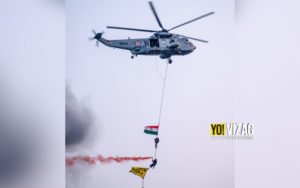 Vizag hosted the International Fleet Review from 4-8 February 2016. Organised by the Eastern Naval Command (ENC) of the Indian Navy, this international maritime exercise had a total of 50 international navies and 95 warships as participants. Vizag became the second Indian city to host such an exercise, after Mumbai in 2001. While the annual Visakha Utsav started in the 90s, it was in the last decade that it picked up momentum and style. With more stalls, greater variety and better entertainment, the Utsav has become grander than before. Entrants into the celebration scene were the Maya bazaar, along with the Vizag Junior Literary Fest and Sounds on Sand to name a few. 2017 also witnessed the first Araku Balloon Festival, as colourful hot-air balloons lit up the hilly skies of Araku. The city also hosted the country’s first Yachting Festival in 2018, putting on an exhibition of a variety of yachts in the beautiful waters of Vizag. The decade increased the importance of Vizag on the economic world map as well. Vizag played host to three editions of the CII Partnership Summit in 2016, 2017 and 2018. The annual business summit organised by Confederation of Indian Industry (CII), was attended by eminent personalities from all over the world and has drawn investment to the city. Besides this, Vizag also had its own Fintech Festival in 2018, which featured the world’s first humanoid robot citizen, Sophia. Additionally, the Government of AP organised a 3-day AP AgTech Summit at Vizag in 2017, with Microsoft co-founder Bill Gates presiding as the Chief Guest. Along with the positives, the decade had in store one of the largest negatives too. In October 2014, Vizag was struck by its worst natural disaster as cyclone Hudhud stormed into the city, laying waste to anything in its path, including the airport terminal’s roof. The city was brought to its knees by heavy rainfall and winds up to 260 kmph. But the prompt response by the state government and efforts by the city’s Samaritans, facilitated a speedy recovery. While once the city only had limited options, its rapid development has led to an influx of multi-national food outlets like KFC and McDonald’s. The latest to join is Burger King which opened in 2019. As the partying scene in the city improved, Vizag was also introduced to the concept of breweries and swanky resto-bars. So while Ironhill started in 2017, Myz-Uno and Soma opened in 2018. An upward trend in the city’s economic growth, was a positive marker for the city. Vizag was declared as the 9th richest city in India in 2016, having Rs. 2.79 lakh crore in its pockets. The Visakhapatnam Port, second largest in India, continues to be the major contributor to the city’s GDP, along with other industries like Visakhapatnam Steel Plant and Hindustan Shipyard. Always a conscious city, cleanliness became an important marker in its growth. Efforts of the GVMC officials reflected in the Swachh Survekshan rankings as Vizag was ranked 5th in 2016 and 3rd in 2017, throughout the country. Under the Swachh Rail Campaign in 2017, Visakhapatnam railway station emerged as the cleanest in A1 category of railway stations. Visakhapatnam Port was declared the second cleanest port in India for two consecutive years (2017 & 2018). Tourism to the city has been in the limelight more than ever before. As part of an integrated naval museum complex, the TU-142 Aircraft Museum was inaugurated in 2017 by the President of India Ramnath Kovind. Activities like kayaking and scuba-diving were also introduced at Rushikonda Beach. Also, India’s first Vista Dome coach train was flagged off in 2017 and travels from Visakhapatnam to Araku and vice versa, allowing tourists to capture the scenic Eastern Ghats along the route. The past ten years also saw many new educational options become available for students of the city. From international schooling that came with schools like Oakridge, Delhi Public School, and Ameya, higher study alternatives became better too. The GITAM Medical College, IIM-Visakhapatnam and IIPE opened their doors to students pursuing these specializations as well.