The first wings over Vizag: An ode to the city's rich history

The first wings over Vizag: An ode to the city’s rich history

A chapter in the history books of Vizag Vizag, the City of Destiny, has been a part of major historic events that date back to the late 1800s and early 1900s. One such event was the first-ever sightings of planes flying on the blue skies above Vizagapatam. John Castellas, a Vizag history and heritage enthusiast and aficionado, narrates the story of a unit of the Royal Air Force (RAF) appearing above the city for the first time.

Also read:  A family of photographers who captured the history of Vizag

The RAF Far East Flight of the Royal Air Force (RAF) was a flying unit of four Supermarine Southampton II flying boats which undertook a long-range exploratory flight to Singapore and Australia in late 1927 and early 1928. The formation flew over Vizagapatam on the morning of 23 January 1928 on the flight leg between Coconada and Chilka Lakes. 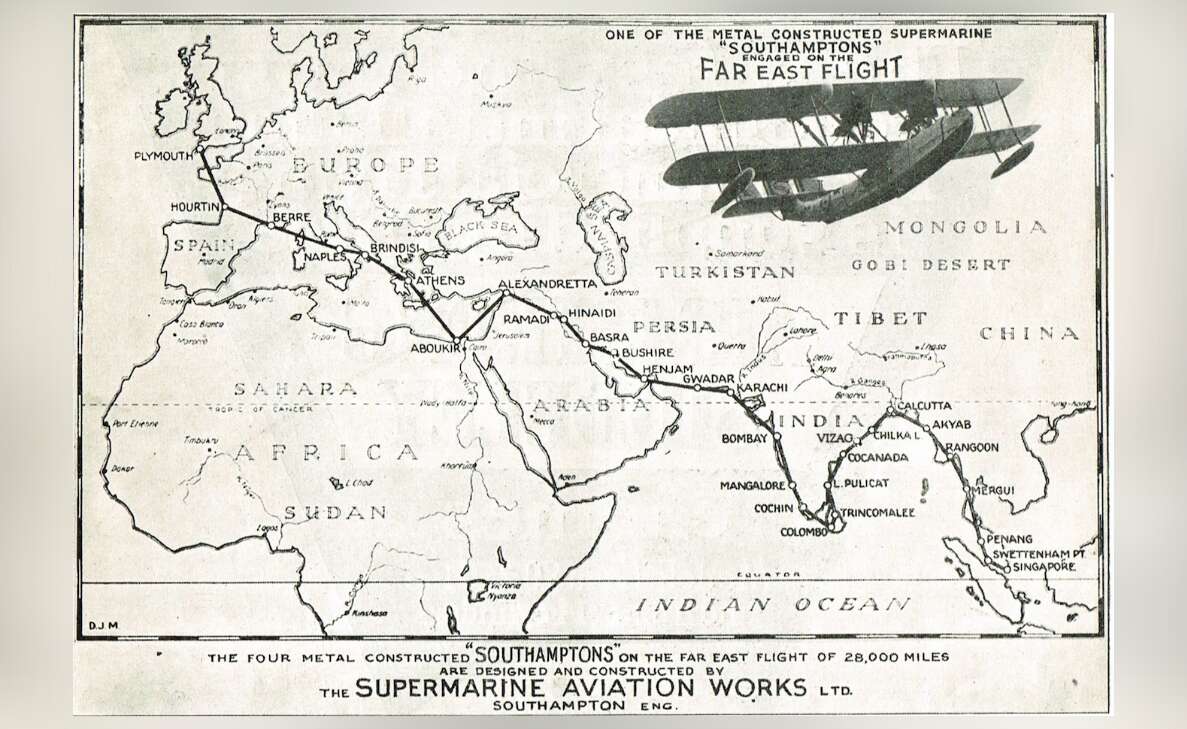 During the 1920s, the RAF carried out several long-distance flights to explore air routes and facilities and test the feasibility of long-range reinforcement of more distant parts of the British Empire. The Far East Flight was formed to undertake a journey to Australia and the Far East starting in 1927. The project’s publicised aims were “to gain experience with the operation of flying boats independent of surface vessels and shore bases, gather information the suitability of locations along the route for flying boats, and to ‘fly the flag’; fostering cooperation between Britain and her Empire …” The flight was dubbed “the greatest formation flight in history” and remains so. The Submarine Aviation Works at Woolston, Southam and D. Napier & Son gave this special colour commemorative folio to members of the Flight in Singapore. 23 January 1928 was also a milestone day in the progress of the Vizag Harbour Construction as the dredger Vizagapatam made its first entry up the channel and into the swamp that was to become the inner harbour. The Government commissioned photographers Rathnam & Co to take aerial photographs from an aircraft of the Far East Flight as they flew the Coconada – Vizag – Chilka Lakes leg of the flight. The aerial photographs were taken of the harbour works as an assessment was being made on the practicability of the harbour, also being a base for flying boats. Major C Hodding, Commanding Officer of Vizag’s East Coast Battalion (Waltair Club President 1931), was also a passenger on board aircraft S-1151 on the flight of the four Supermarine – Napier flying-boats that took off from Coconada at 0700 on 23 January 1928. They followed the coast and circled above Vizag, where the new harbour works were in progress. These were the first aircraft seen in the area, and large crowds gathered at vantage points in Vizag and Waltair as the flight flew a circuit in formation. As pre-arranged, a message was dropped to the Collector, Mr AJ King (Waltair Club President 1928 – 1930), when the flight was over Waltair. The flight was destined for Chilka Lakes, where it landed later that day. (Reported in Flight Global on 9 August 1928).

Suppose aircraft landing technology had remained limited to flying boats and sheltered inland waters. In that case, Vizag may well have become a base for international flying boats. Later that year, the UK Air Ministry evaluated designs for several all-metal, fifty-passenger flying boats for use in the London – Cape Town and India – Australia air routes. Among those designs was one based on the Supermarine – Napier driven by six engines totalling 3000 HP and had sleeping accommodations for all passengers. The specification called for a non-stop range of 1000 miles and the ability to fly with a full load with two engines out of action. The new aeroplanes were to be equipped with a kitchen and dining room and weigh between 30 and 40 tons.

Written by John Castellas, whose family belonged to Vizag for five generations. Educated at St Aloysius, migrated to Melbourne, Australia in 1966, former General Manager of Engineering at Boeing & Qantas Airways, in retirement Lecturers in Aviation Management at Swinburne University and is a Vizag aficionado.

Stay tuned to Yo! Vizag website and Instagram for more stories about the city’s history and heritage.