Swaraj proves herself as one of the best ministers again Sushma Swaraj has always been one of the most helpful ministers of the country and has always helped the citizens in all the ways she could. No matter what the crisis was, she has always made sure that she was available to help her citizens in abroad. She is always active on the social networking sites like Twitter and took a note of the various problems of the citizens on her Twitter handle. After recently saving one Indian woman from Pakistan who was ill-treated by her in-laws and saving six Indians trapped in the clutches of ISIS, she has proved herself again by saving another guy Vinay Mahajan, kidnapped and held for ransom in Serbia.

Brother of the victim, Rajeev Sharma recently took up to twitter and tweeted to Ms Swaraj urging her to save his brother who was being held for ransom in Serbia. The tweet also had an accompanying video of him being brutally assaulted by the kidnapper(s). Vinay and his parents trusted an agent going by the name of Satinder Singh, but he misled them and took them to a refugee camp. Swaraj took notice of the tweet and immediately alerted the appropriate authorities in Serbia. The very next day, Vinay Mahajan was rescued and in the safe custody of Serbian authorities.

She did not stop with this and further went on to urge the Protector General of India, M.C. Luther to take serious action against the agent to make sure no one else falls prey for him. 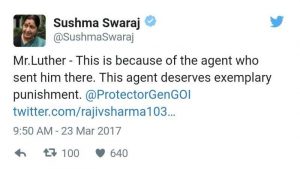 Looks like it was just another day for Swaraj at the office!