With the recent ban on TikTok and 58 other Chinese apps coming into effect in India, both video creators and consumers have been experiencing a void in their daily dose of entertainment. While competitors like Instagram have launched new features on their apps replicating similar features, the
quality and ease seem far away from what Indian users have been used to. In this scenario, a Vizag-based company – Inflolabs Pvt Ltd, has come up with a fierce alternative to TikTok in the market called ‘Remush’. Equipped with numerous features, Remush has already registered over 65,000 downloads on the Android PlayStore, and 42 Million views less than a week of its launch. The Vizag-based Founders of Inflolabs Pvt Ltd state that Remush is an app “Made In India, Made For India.” The video creation and sharing platform is powered by Artificial Intelligence (AI) and comes with a lot of interesting features. Enabling users to make high-quality videos-both original as well as lip sync-the app is touted to offer top notch user experience, making it a fitting alternative to TikTok. In addition to the added security and data protection that gives Remush an edge over other mobile apps, the application also features over 10,000+ stickers and 2000+ effects boasting of one
of the largest mobile centric VFX repository. With added emphasis on post production and cinematic effects, Remush offers big-screen style simple editing features on video. Other salient features of Remush include tag-based navigation, face-swap for video memes, credits, and a range of video
templates among others. The makers also plan to bring in features such as personalised watermarks and enhanced credit system to better the experience of using Remush. 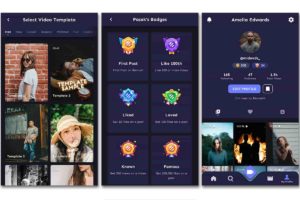 In a conversation with Yo! Vizag, Founder of the company Mr Kiran Pasavedala said, “Remush is an application made mainly for Indian users. Since last year, my Co-Founder Naresh Uppada and me were looking for alternatives in the video creation market, as customers now prefer short videos for
entertainment. However, our search revealed that certain Chinese applications have been working as a syndicate to collect Indian users’ data. The grave breach of privacy is unethical and poses a threat if the content falls into wrong hands.”

With extensive experience in building softwares over the last decade, college friends turned business partners Kiran and Naresh took a step forward after PM Narendra Modi announced the ‘Vocal For Local’ campaign earlier this year. “We had a solution in mind, and got a boost after the Prime Minister spoke about the Vocal For Local campaign. In a way, we also wanted to show that Indians too can make world-class products. With Remush, we have had a global launch with a very specific focus on India and have already seen numerous users register and have fun on the app,” explains Kiran.

With distribution and content residing in India, Remush hopes to become the next big video entertainment platform, with no compromise on safety and security. The free app is currently available on Android PlayStore for downloads.