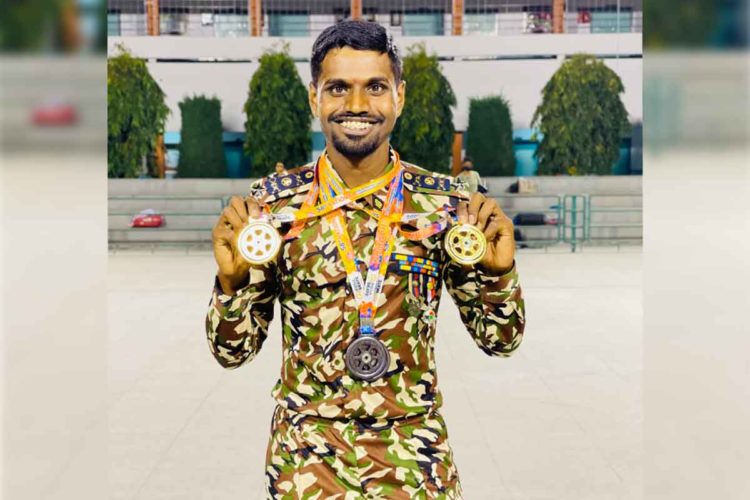 Visakhapatnam is known for its excellence in the field of roller skating. It has been playing a pivotal role in grooming some of the national roller skating champions. Recently, Rayudu Arun Kumar, a young roller skater from Vizag, represented Andhra Pradesh at the 58th National Roller Skating Championship held at Mohali and Chandigarh. He came back a champion, winning two Gold medals and two Bronze medals.

The team of Yo! Vizag connected with the sportsman to get to know his journey as a skater. As a young child, who inherited a family ailment of asthma, he was recommended to get into high stamina demanding sport. Arun was only 3 years old when he was introduced to roller skating. He initially started coaching under the guidance of Seelam Laxman Rao. From practicing, at the modest rink at Vizag Steel Plant, to representing India internationally, the 21-year old has come a long way.

Arun Kumar started participating at various district and state-level roller skating tournaments in the 6 – 8 years category. It was also during this time that he bagged his Gold medal representing Andhra Pradesh at a national-level tournament. Going further he represented India, during his high school in 2014, at the Asia Championship for artistic skating in China, where he was ranked fourth.

In 2019, the athlete suffered major injuries to his shoulders and faced a setback in his sports career. “The pandemic actually helped ease my anxiety and gave me time to heal completely from my injuries,” said Mr Kumar.

In 2021, he came back stronger than ever when he participated in the 58th National Roller Skating Championship held from 31 March 2021 to 11 April 2021. Arun, and his partner Farheen Shaik, bagged two gold medals in the pair skating and couple dance competitions. They were trained and guided by Akula Pavan Kumar, who is considered to be one of the best coaches for artistic roller skating. The skater also won two Bronze medals in the categories of freestyle and free dance skating. He further went on to add that this year is the third consecutive year where he has been leading the artistic skating team of Andhra Pradesh.

Arun further said that at present the sport of roller skating is not being funded by any government body and urges to create awareness of the sport locally. “This is the first year that skating champions were sanctioned monetary incentives by the Andhra Pradesh State Government. We are glad to receive such encouragement. However we are looking forward to getting financial support for training at an international level,” informed Arun.