Jr NTR’s upcoming movie Jai Lava Kusa has got the social media buzzing. The movie, which is set to release on September 21st, has NTR playing a triple role. The theatrical trailer of Jai Lava Kusa was launched on Sunday and is getting a tremendous response from all quarters.

So far, the trailer has reached the 1 crore view mark on social media and the frenzy among the fans just doesn’t seem to stop. NTR’s role as Jai is being widely anticipated by everyone and the trailer gives us a glimpse of this role. NTR has caught everyone with astonishment and the celebrities too couldn’t stop praising him. They took to Twitter to hail the trailer and NTR. Here are the tweets by some of the celebs. 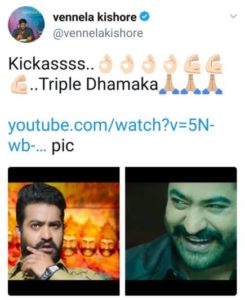 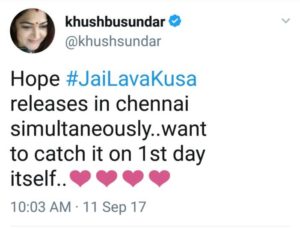 And finally, a vote of thanks from NTR himself

Seeing the overwhelming response for the trailer, Jr NTR thanked everyone and said that he would strive to satisfy everyone with his work. Jai Lava Kusa is being released on the occasion of Dushera under the NTR arts banner.