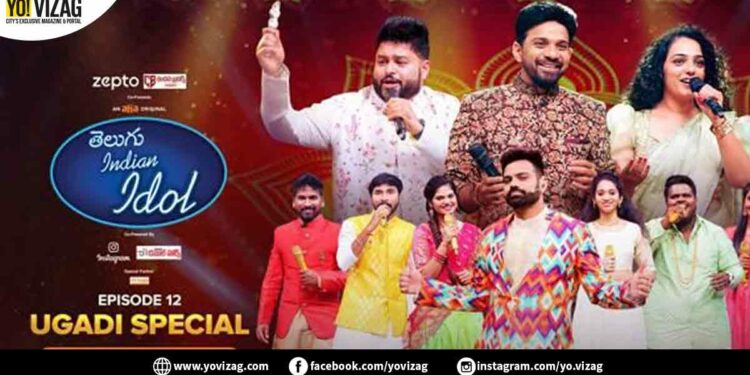 The Indian Idol Telugu and the  Special 12 team have finally entered into eliminations. The last weekends’ episodes were entertaining and emotional as the first round of eliminations took place. The singing reality show is being aired on the Telugu streaming platform, Aha every Friday and Saturday. The show is being hosted by Indian Idol season 5 winner Sreeram Chandra and the judges include, actress and singer Nithya Menon, music director Thaman, and playback singer Karthik.

As the episodes aired during the Ugadi festival, all the participants seemed to have embraced the festivities and most of them performed to actor Balakrishna’s songs. Sticking to the theme, the host also kickstarted with the legend’s song. Here is the gist of episodes 11 and 12. Episode 11 had a total of 6 participants, dressed to the occasion. The episode had some tough competition as every participant outdid the other. The first participant Lalasa picked the song Ravayya Muddula Mama from Samara Simha Reddy. The host’s relative received the ‘Bomma Blockbuster performance’ from the judges. Lalasa’s mom who attended the festival special show served the Ugadi Pachhadi to all the judges. Vagdevi, who sang one of the toughest songs, Suramodamu from Aditya 369 also received the ‘Bomma Blockbuster performance’ from the judges after a little scare from Thaman who tried to trick her. Participants Maruthi, and Jaskaran Singh also impressed the judges with their performance and the Punjabi singer also got a ‘how to learn Telugu in 30 days’ book from Thaman as a gift. The last participant Aditi Bhavaraju sang the song Enno Ratrulosthayi Gani from the film Dharma Kshetram and impressed the judges like always. At the end of the show judges, Karthik and Thaman shared their experiences and inspired the participants.

Episode 12 was intense as one of the Special 12 got eliminated. Allu Arjun’s fan Jaskaran Sing who was the only North Indian in the Telugu reality show had to bid goodbye. The episode had a total of 6 participants. In the first one, Srinivas sang the song ‘Swathilo Mutyamantha’ song from the film Bangaru Bullodu. The participant forgot the lyrics and was warned to be careful next time by the judges.

Showing off his dancing skills along with singing, participant Jayanth sang the song Olammi Tikkaregindha from Yama Gola. He also danced along with host Sreeram for the famous Natu Natu song. The third performer Vaishnavi who is also the youngest singer in the reality show received the ‘Bomma Blockbuster performance’ for her attempt on the song Mrignayanaa from the film Gautamuputra Satakarn.

Participants Renu Kumar, and Lakshmi Sravani also managed to impress the judges with their unique selection of songs and kept the audience entertained. The last performance was by Manya who failed to impress the judges who sang the song Visirinadi Vasantha Gaanam from the film Bhairava Dweepam. One of the best classical song performers of the show, she was encouraged by the judges to come back stronger.

As this was the first episode of eliminations, the stage was filled with tension. Among the 12 participants, the three least performers in the show were Manya, Jaskaran Sing, and Maruthi. The Allu Arjun fan was eliminated from the show.

Let us know who your favourite singer from the Special 12 of the Indian Idol Telugu is in the comments below!