“I am often asked if I felt any less of a mother to an adopted child. I disagree, the moment I held my daughter in my hands, I became an instant mother,” – Smrite Bhatia

Adoption is a process that connects a child to a mother’s love. Many couples hesitate to adopt a child owing to the societal taboo attached to it. Here is how a former pageant model broke all stereotypes and chose this less taken path towards motherhood. Smrite Bhatia works as an Associate Vice President Client Services at Precistat, an IT firm in Vizag. She was titled ‘Mrs India’ in 2019 at the Visonara Global Mrs India pageant. In conversation with Yo! Vizag, she urges society to open discussions on these topics and help lift the taboo off adoption.

With her mother being a catholic and her father being a Punjabi, Smrite grew up in a multicultural family. Her family used to visit the Bal Niketan orphanage for almost every occasion, be it Christmas or Diwali. “Owing to the regular visits to Bal Niketan orphanage during my childhood, I was exposed to a charity very early on,” says Smrite. During such visits, she was filled with empathy for the underprivileged children at the orphanage. “That’s when I decided and kept telling my parents the same, that my daughter will be from a home such as this,” shares Smrite.

As she grew up, Smrite found that many of these children come from broken homes or through violence. She believes that such children deserve the same if not more love and affection just as much a regular child gets.

On bringing the family on board and breaking the societal stereotype Her dream to adopt a child continued till she got married in 2014. The concept of adoption being a taboo in society and with it generally being associated with marital problems, Smrite did face some backlash. Being a healthy couple, capable of conceiving a child of their own, even her husband was initially skeptical. Smrite patiently made her partner understand her desire to provide for an orphaned child. It took her a couple of years, eventually, her husband did come around. It took the couple another 2 years to get their family’s support in adoption.

Another commonly prevalent assumption by society is that only strained marriages decide to adopt. However, Smitre strongly believes that healthy and strong marriages, with a great bond between the couple, also choose to adopt children. “We intended to welcome a child into our world wholeheartedly and that was all that mattered,” says Smrite. In India, the only path to adoption is through the Central Adoption Resource Authority (CARA). After registration, the authority conducts tests to certify that the couple is fit to be parents. After a wait of 3 years, post registering with CARA, the Bhatia family was blessed with a 6-month-old baby girl.

According to Smrite, there is a huge misconception that parents get to choose the child they’re adopting. In fact, the concerned authority takes the couple’s pictures, blood samples and presents a child with similar physical features. This process takes a long time. The child presented will be medically screened and the parents do have the choice of handing the child back to the authority only on grounds of medical ailments. After acceptance, the family gets a 15-day window to take in the child. “Maia, my daughter, is now 11 months old and is a very happy child. A child with no much fuss or tantrums, she is truly a blessing,” shares the new mother. Appreciating the support she received, Smrite says, “Maia’s pediatrician, Dr Rajni Mukherjee has been immensely supportive. Whenever my child falls ill, the only person I can turn to is a doctor, and Dr Mukherjee has taken in Maia with open arms. She even guided me through Maia’s nutrition. With a short time to prepare, compared to the conventional 9 months period, parenting does tend to get daunting. Dr Mukherjee has helped in making this journey of motherhood easy.” 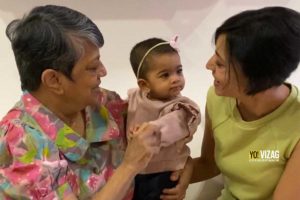 Being a new mother, Smrite found help and support coming in from every direction. Her parents and Ramana Bodepudi, Founder of Precistat, are among those she thanks for the support received. “I believe the two pillars for a woman’s wellbeing are economic independence and emotional support from her loved ones. I am fortunate to have them both. It is just the matter of having the courage to ask for help when needed.” says Smrite.

Going further, she intends to adopt a child, who lost their parents and family amidst the violence of war. Influential women like Smrite Bhatia speaking up about such topics is indeed a sign of a better tomorrow. We at Yo! Vizag wishes Smrite and her baby years of good health and happiness.