6 heritage monuments of Bheemili that are a must visit Away from the cacophony of the city lies Bheemunipatnam aka Bheemili to the north of Visakhapatnam. Once flourished as the destination for sea trade, this town’s history dates back to the 17th Century. During that period, Bheemili remained one of the most prominent settlements both for the Dutch and the British in India. Back in 1861, it became the second oldest municipality in India. Owing to its colonial heritage, the quaint town housed several historic edifices, reflecting British and Dutch architecture. Tracing back the roots, here are 6 Heritage monuments of Bheemili.

Gali Meda or Hawa Mahal, translates to ‘The Building of Winds’. This circular tower of Governor’s Bungalow Complex was featured in several Telugu movies including Maro Charitra and Sreevariki Prema Lekha. Despite being a historic landmark, the dilapidated Gali Meda slowly perished in the face of neglect. Also known as the ‘Red Church’, the chapel in Bheemili was consecrated during the British regime. The cynosure of this church is the ruby exterior of the stained glass windows, which depicts the anecdotes from the bible. The interesting feature of the structure is that it was designed, back in the day to amplify the sound, enabling the speaker to hear clearly. 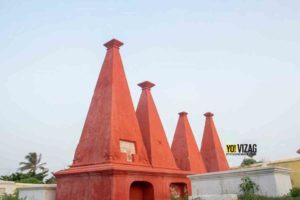 The Dutch Cemetery situated near the lighthouse in Bheemunipatnam, is divided into two parts. While the entrance has graves of the British, the rest of the area has tombs of the Dutch. Each of the fifty-two tombs present in the cemetery, resemble pyramids, with the cause of death engraved on the tombstones. 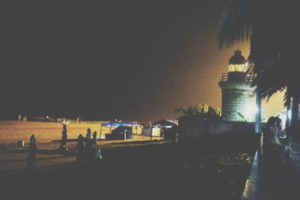 Painted in white and black, the lighthouse stands tall on the shore of Bheemili Beach. Constructed in 1868, the port used to handle cargo from Chennai and Kolkata, under British rule. Adorned with arches, the imposing structure holds huge clocks on the exterior of each of its four sides. Built by the Dutch in the early eighteenth century, the clock tower was a major landmark in Bheemili, during the bygone era. Located on the hill of Pavuralakonda, Bheemeswara Swamy is the presiding deity in the shrine. According to the temple history (sthala purana), the place is said to be constructed by the Mindi Kings in the 14th century.