Chandrababu Naidu posted to his FB page pictures of a letter he had written to PM Modi on October 12th. In support of Modi’s move to demonitise high value currency he put up a status – I welcome @narendramodi Govt’s historic decision to ban Rs.500 & Rs.1000 notes. This is bold step towards eliminating corruption. TDP has been at the forefront of pushing for this ban on high-value currency notes. This move will change the face of Indian economy. The re-introduction of Rs.500 notes, introduction of Rs.2000 notes needs elaborate discussions & alternatives should be looked into. Centre needs to reassess the steps & tread with caution before introducing new denominations, to eliminate stash.

The letter addressed to ‘Sir Modi Ji’ and signed off with regards by the CM starts off saying that the country is fortunate to have Modi as the Prime Minister. He applauds the PM for grabbing the opportunity for transformational change when such opportunities are rarely seized. He writes, “Social values of honesty, hard work, thrift and simplicity get and even the political institutions and organisations lose their credibility as they get sucked into the system of black income.”

He acknowledges the fact that black money is used to bribe voters during elections. While he appreciates the bold move already made, he thinks more stringent action should be taken to curb the problem. “For healthy development of global economy and well being of people of all nations, global crusade on curbing black money should be taken up by all nations in coordination.”

He believes that in the era of e-governance and technology driven banking systems, the RBI and central government should strive towards a cashless digital transaction economy. This way a record is created of all transactions made, eliminating the problem of counterfeit money automatically. He signs off saying, “Indian economy is slated to grow 7.6% this year making it one of the fastest growing large economies in the world. To remain in the economy ‘Sweet Spot’ and reach double digit growth, country must ensure forward momentum of its programme of economic reforms. By curbing the proliferation of parallel economy and transforming India into a cashless transaction economy, the country can be pride of the world.” 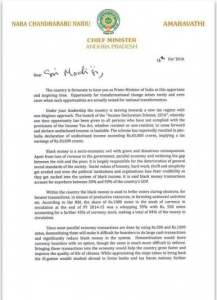 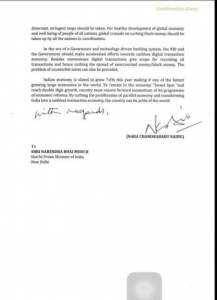