6 Telugu movies of Samantha that prove her acting skills

6 Telugu movies of Samantha that prove her acting skills 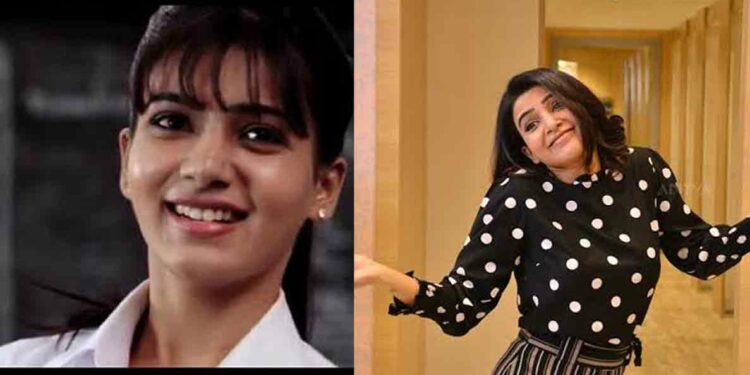 Samantha Ruth Prabhu is more than just a great actress. Her charitable activities, sustainable lifestyle, and social media presence win the hearts of the audience. This iconic actress will turn 35 this year and is all set to entertain us with the upcoming movie Kanmani Rambo Khatija (KRK), also starring Vijay Sethupathi and Nayantara. Her long-standing career is a testament to her versatility in acting. Samantha is an inspiration to many and so are her characters in these 6 Telugu movies which portray her best performance. On the occasion of her birthday, let us revisit some of the best Telugu movies of Samantha.

In her debut film itself, she gained a huge fan base for her glamour and acting. This is a romantic movie starring Naga Chaitanya, directed by Gautam Vasudev Menon. This is an intense drama yet a feel-good film. The music by AR Rahman is beyond expectations. With a high rewatch value, this film stands the test of time to be one of the best movies of Samantha. Heroines may come and go but the character Jessie will be imprinted on our hearts forever.

Yeto Velipoyindi Manasu is one of Samantha’s most underrated movies. This movie tracks the love story of a couple played by Samantha and Nani, from childhood to adulthood. It is an out-and-out romantic movie directed by Gautam Vasudev Menon. The actors deserve to be duly credited for playing different ages with ease. It is one of the rare films where a breakup from the female lead’s perspective is shown. Ilaiyaraaja’s music for this movie is so soothing, that it is still on people’s playlists. In case you missed out on this one, consider this a sign to watch this amazing movie.

U-turn is a supernatural thriller directed by Pawan Kumar. Samantha has truly outdone herself in this movie, especially with her solo dance performance in ‘The Karma Theme. This is a gripping narrative about the mysterious accidents at a u-turn on a flyover. This is a must-watch movie, if you have not watched it yet.

No better time than now to revisit Sukumar’s mass masterpiece. Paired alongside Ram Charan, Samantha pleasantly surprises everyone with her acting in this movie. Her native accent, over-the-top expressions, and sizzling dance moves steal everyone’s heart. This action drama can never be appreciated too much. Re-watch this movie today for Samantha’s terrific acting.

Samantha brilliantly shoulders this comedy-drama. Oh! Baby is a treat for all Samantha fans as she entertains the audience in each frame. So far, this movie has shown all shades of this talented actress. This family entertainer can be rewatched any number of times. Directed by Nandini Reddy, this interesting movie is a remake of he South Korean film Miss Granny.

Just like Jessie left a mark, so did Sravani from Majili. Samantha plays the role of a dutiful and devoted wife, which all the men out there are wishing for. This movie deals with the after-effects of a breakup in a marriage. It is a beautiful story told by the director, Shiva Nirvana. A relatable, emotional, and hilarious film is what you need to celebrate Samantha’s birthday. Yashoda, Wakanda Forever and other must watch movies releasing at the theaters this week of November