10 things that only people in Vizag know about Our coastal city is a wonderful mix, bringing together the traditionalists and the modern on a similar platform. While the city is not completely metropolized by fast cars and a faster life, thankfully, it retains the small-town charm and character. This, coupled with its quintessential traits, gives Visakhapatnam and our Vizagites its own habits. You would relate to these too, given you’ve been in the city long enough.

Ask anyone what a good place to go to is, and you’ll be told that its the beach. In fact despite being there for billions of years, the beach still hasn’t lost its charm for the city dwellers, and the weekends are the best time to note that. The beach will always be jam-packed at that time, and the roads too tough to navigate. In fact, if you’re a typical Vizagite with a car, you’ll avoid driving through the RK beach road, Visakhapatnam for this very reason. 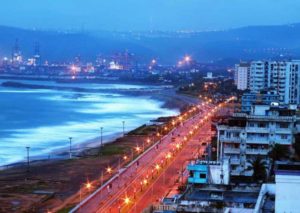 The traffic is one of the biggest woes, and no different in our Visakhapatnam. You’re overtaken from the left and right and are only glad that vehicles still aren’t advanced enough to jump over you and land right ahead! Autos are your largest fear and foe, with their drivers being as undependable while driving like the rates they charge.

Did I say rates? Oh yes, the rates. This is the most unexplainable bargain-oriented aspect of the city. When you ask the auto driver why he wants Rs. 100/- for a short trip like CBM compound to the Beach, you’ll be told that the diesel rates have gone up. If you’re taking an auto you’ll quickly learn to distinguish between the genuine and the double-chargers. In case you’re new, the thumb rule is to start bargaining at 50% of the rate they ask. And if you’re asking about meters, then what meters? Me auto driver never heard of it! Accidents do tend to happen here as well, but there’s method to the madness. The hierarchy of whose fault is it, is to be followed as such: dogs, cows, cycles, bikes, autos, buses and cars. The BBP rule (big bandi pays) is one non-existing traffic rule that is completely adhered to.

The biggest pride that a typical Vizagite takes about his/her city is the time taken in commuting. You can reach approximately any place in fifteen minutes flat and in twenty you can be out of the city. Anything that takes more than half hour of driving is considered as a long-drive and needs ample planning. This is a twiddle-thumb for people in Mumbai, Chennai and Bangalore who spend one fifth of their day navigating through a sea of traffic and one ways.

With the sweet South Indian twang dominating the English that many speak out here, some things still don’t stop bothering you. For example however you try to explain that its quarter to eight, it continues to be quarterless eight. You’re told that the pocket of chips has a lot of air and that the D in GoDavari that you take to HyDerabad, is pronounced as ‘D’ and not ‘da’. The city does sleep in the afternoon, and the trouble is that one remembers to buy the most important items around that time. The smaller stores close shop and open by four pm, and if it wasn’t for the bigger retail malls westernizing, we wouldn’t venture out too.

We in Visakhapatnam love our saris and gold, and the stores will be flooded on decided occasions. The New Year, Sankranthi, Ugadi, Varalakshmi vratam, birthdays, anniversaries, cousin’s wedding, friend’s birthday, Akshaya tritiya, low gold rates, may-hike gold market, new sari design, sale and arrival of fresh stocks are just a few of the reasons that keep us going and buying and the shops selling and thriving. Relatives are all-praise for the picturesque beauty of Visakhapatnam and think we’re living a holiday, when they come visiting in November (They should see us sweating it out in May). We’re happy by the praise showered on us by these people, so much so that we oblige them with touristy trips through the city. There isn’t much to show, but then there is! The submarine museum, beach, Rishikonda, Kailasagiri and they’ve seen it all! Next we think of packing them off to our very own hill station, Araku!

Back to the beach

Everything in Visakhapatnam begins and ends here, and often you come and sit here too, eating the roasted corn, murri mixture or ice cream. Perhaps you come in the early hours or with the crowd or on a weekday, but most Vizagites do visit. And what unites most of us is that like all the others who sit at the ramp, for some reason, you too end up sitting to face the main road, not the pristine waters.

Disclaimer: The opinions expressed within this article are the personal opinions of the author. The facts and opinions appearing in the article do not reflect the views of Yo! Vizag and Yo! Vizag does not assume any responsibility or liability for the same.

How to focus on leading a healthy life?

How to focus on leading a healthy life?